The Hanoi Summit – We Asked Eric Gomez What Happens Next in U.S.-North Korea Relations 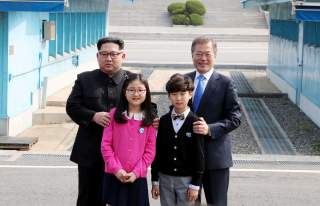 If the tentative Hanoi agreement text released before the summit was accurate, Hanoi should have been a boon for South Korea’s president. An end-of-war declaration and a U.S.-North Korea liaison office would have brought the United States into Moon’s plan for a peace regime and mimic a successful South Korean initiative that enables regular inter-Korean working level contact, respectively. Sanctions relief in exchange for closing Yongbyon—the issue that ultimately caused the breakdown at Hanoi—would have facilitated larger inter-Korean economic projects, another hallmark of Moon’s diplomatic plan.

Hanoi puts Moon in a tough spot. Despite what some American pundits assert, Moon is no enemy of the U.S.-South Korean alliance. While Moon can advance limited inter-Korean economic and diplomatic projects, he cannot completely break ranks with Washington and pursue significant projects that would run afoul of U.S. and UN sanctions.

However, there is also a risk in putting inter-Korean initiatives on ice and losing the considerable momentum that South Korea built in 2018. Furthermore, domestic political troubles such as economic sluggishness and recent air pollution problems in Seoul have hurt Moon’s previously sky-high popularity. These issues are unlikely to cause serious political problems as Park Geun-hye’s impeachment dealt a significant blow to South Korea’s conservatives that they haven’t recovered from, but mounting challenges at home may restrict Moon’s policy options when dealing with Kim and push inter-Korean diplomacy down on his list of priorities.

The best option available to Moon is to play an active role in breaking the current impasse between Trump and Kim. Moon started down this path shortly after the summit fell apart when he called a meeting of South Korea’s National Security Council and instructed his top officials to begin working on plans to help the United States and North Korea get back to productive diplomacy. The outcome of this effort is unclear, but Seoul’s recent track record of successful engagement with North Korea provides a glimmer of hope that the failure at Hanoi need not lead to a breakdown of talks entirely.

Moon and his administration may not have much time. North Korea seems to be readying the Sohae satellite launching facility and the United States appears unwilling to budge from its position that nuclear disarmament must happen before sanctions relief. He and his government will have to work quickly and creatively to restart U.S.-North Korea talks.

Eric Gomez is a policy analyst for defense and foreign policy studies at the Cato Institute. @EricGomezAsia