The Hanoi Summit – We Asked Frank Aum What Happens Next in U.S.-North Korea Relations 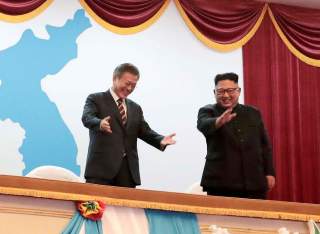 Most likely, we will see a return to the ad hoc, irregular diplomacy at the Pompeo and Biegun level we saw after Singapore.  This is unfortunate because a consistent, working-level process is necessary for real progress on denuclearization and peace.  The two sides will probably focus on narrowing the gap in the initial reciprocal steps required, with particular attention to the definition of denuclearization, the scope of Yongbyon dismantlement, and the extent of partial sanctions relief.

I am much more pessimistic about the future path than I was pre-Hanoi. The continuation of the “dual freeze” on nuclear and missile tests and large joint military exercises should allow diplomacy to proceed, but this freeze seems precarious.  North Korea has criticized the replacement of Key Resolve/Foal Eagle with the new Dong Maeng exercise as just a change in name only.  Similarly, the U.S. side is concerned that North Korea’s re-assembly of the Sohae test facility could mean the possibility of another North Korea satellite launch, which would make its missile test freeze one in name only.

The Trump administration’s move toward an all-or-nothing approach that requires complete denuclearization first before complete sanctions relief seems to be a shift back toward the 2017 policy.  North Korea is unwilling to take big steps toward denuclearization without more intermediary, trust-building measures, but this is incompatible with Trump’s “big deal” approach.  Complete denuclearization is impossible within a two year timeframe so the best we can hope for is a comprehensive agreement on paper that kicks the implementation can down the road, but even this is probably unlikely.  More probable is a return to bad relations.

There seemed to be the foundation for a “small” deal at Hanoi that would include an end of war declaration, exchange of liaison offices, additional remains returns, some sanctions relief, and some verified dismantling of Yongbyon, Punggye-ri, and Dongchang-ri.  This should be the basis for an interim agreement.  Given that progress on inter-Korean cooperation relies on a U.S.-DPRK breakthrough, we should expect greater shuttle diplomacy from President Moon, including perhaps a proposal to make it trilateral negotiations and a plea for both sides to be more flexible.