The Hanoi Summit – We Asked Ian Bremmer What Happens Next in U.S.-North Korea Relations 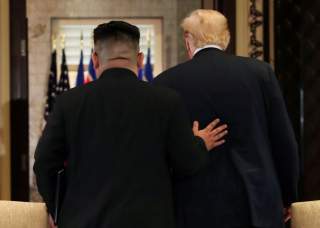 Largely back to where they were before all the positive (and negative) excitement over the Hanoi summit began. In other words, the world goes back to having a rogue state on its hands, with China wielding the most influence over it. That may not sound like much progress, but changing North Korea’s behavior has been a heavy lift for U.S. presidents far more savvy in foreign affairs than President Donald Trump. And make no mistake; even with a failed Hanoi summit, Trump has still managed to have an impact on North Korea when it comes to its engagement with the outside world.

Pyongyang has much better relations now with Beijing and Seoul than it did prior to Trump’s first engagement with the Hermit Kingdom; Beijing because it now sees its relationship with North Korea as something it could leverage in trade talks with the United States, and Seoul because its growing increasingly concerned with U.S. security commitments on the Korean peninsula, forcing them to more actively take diplomatic matters into their own hands. Beyond that, the fact that Trump has shown he’s willing to move off of the United States’ long-standing “denuclearization or no engagement whatsoever” approach to North Korea also means that there’s now an opportunity for diplomatic engagement around inspections, and even the possibility of some sanctions pullback in exchange for limiting Pyongyang’s missile and nuclear development. And that’s even true if the North Koreans decide to go ahead with another rocket launch.

In short, we’re seeing movement on the North Korean issue. And even if Trump isn’t the one to achieve the breakthrough—which would require a concerted effort to work multilaterally to reduce sanctions against the North Korean, not a strong suit of this particular White House—better relationships between North Korea and China/South Korea makes nuclear escalation less likely than it was before. That’s a win for everyone.

Ian Bremmer serves as president of the Eurasia Group, a political-risk consultancy, and a Global Research Professor at New York University. He is the author of the new book Superpower: Three Choices for America’s Role in the World.