The Hanoi Summit – We Asked Jeongmin Kim What Happens Next in U.S.-North Korea Relations 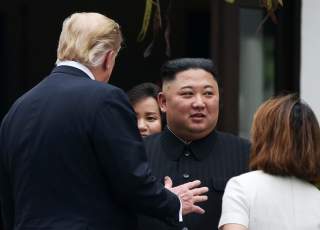 The Hanoi Summit, intentionally or not, displayed several symptoms that revealed the roots of the U.S.-DPRK disagreements and impasse. It is a rare and crucial reference for those who seek direction on where to go next.

One notable symptom is how the summit was held without an already-negotiated agreement, which shows that working-level talks had to leave blank spaces for their leaders to have a final say.

These blanks turned out to be pretty big. Trump allegedly asked for the dismantlement of nearly the entirety of North Korea’s weapons program, which was already known to be something Kim has consistently rejected. Kim asked for relief from basically the entirety of the sanctions against his country, which Trump unsurprisingly saw as unacceptable. The Hanoi Summit became a top-down “chicken game” where the two authoritarian leaders both brought their own versions of a “big deal” and both lost.

What comes next, therefore, is unlikely to be a third summit until the terms of a potential deal have been sufficiently negotiated, as another “no-deal” result will cause domestic political damage to both leaders. This temporary halt to a top-down approach in favor of more working-level meetings, albeit slow and without photo ops, will give way to more detailed negotiations.

With no summits in near future, the most likely scenarios for what comes next are either interim deals or a North-Korean about-face. This is where the lessons of Hanoi will be imperative to U.S. policy-makers.

Some see that the ball is in Pyongyang’s court and believe Kim should make a genuine gesture towards denuclearization, but this is wishful thinking that misreads how North Korea is designed to operate. It is actually Washington that now has an opportunity to craft a better approach to preventing escalation and aim for an interim deal.

Trump emphasized to the last minute how North Korea can become an “economic powerhouse” if it denuclearizes. However, Ri Yong Ho’s press conference signaled that security guarantee are “more important” to them than the removal of economic sanctions.

This hints at the existence of an unbridged gap between what the U.S. thinks North Korea desires and what it actually wants. Although North Korea would appreciate opportunity for a modest economic breakthrough to prove to their people that moving away from the Byeongjin line was meaningful, its top priority is still the survival of the hereditary, personalist authoritarian regime. Worst comes to worst, the regime is politically equipped to justify shifting their policy line away from an economy-first one and back to a more military-based doctrine if America continues to misinterpret them and the denuclearization negotiations threaten the regime’s survival.

American policy-makers will, and should, learn from this miscommunication and base their next offer on what North Korea wants, not what America wants them to want.

This is where South Korea’s Moon Jae-in can, and is equipped, to help. While carefully pushing for interim deals like a U.S. liaison office in Pyongyang and a trilateral declaration of the end of Korean War, Moon can help the U.S. and North Korea further normalize relations and understand each other’s desire better.

Jeongmin Kim is currently pursuing a master’s degree in Political Science at Seoul National University, where she focuses on North Korean politics and comparative studies of contemporary authoritarian regimes. She previously worked at Reuters Seoul bureau and CSIS (Center for Strategic International Studies) Korea Chair, where she mainly monitored and analyzed North Korean state media. You can reach her on Twitter @jeongminnkim.