The Hanoi Summit – We Asked Jihwan Hwang What Happens Next in U.S.-North Korea Relations 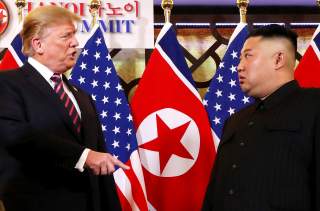 The Singapore Joint Statement between the U.S. and North Korea was not that satisfactory, but the summit nonetheless produced an agreement. So most South Korean people were disappointed to see President Trump and Chairman Kim walk out of the negotiation table with no deal. Because the Singapore statement was quite comprehensive on denuclearization and a peaceful regime, the Hanoi summit was a time for more details. In fact, the Hanoi summit could agree to at least a ‘small deal’ in which the U.S. and North Korea give and take several detailed agendas. When U.S. Special Envoy for North Korea Stephen Biegun delivered a speech at Stanford University, most people expected that Washington and Pyongyang would produce a deal. However, both turned out to be more demanding. North Korea wanted the U.S. to lift major UN sanctions, and the U.S. wanted the North to denuclearize all nuclear facilities and materials at Yongbyon and another site. So, the pessimists emerged after the Hanoi summit, predicting that the nuclear negotiation will be stalled, leading back to a new crisis like the one in 2017. However, the negotiation is likely to go on only if Kim Jong Un continues to keep his promise not to resume nuclear and missile tests, as President Trump said.

Then, where do we go from here? Although no deal is better than a bad deal, pursuing a big deal does not always lead to a good deal. Because a big deal involves a big challenge, it may lead to a breakdown of the negotiation. The summit normally does not start a new negotiation at the table. Both Washington and Pyongyang demanded more than the other expected, but the preparations were not enough at the working-level. A detailed and specific agreement must be made in advance before the summit. When negotiating parties have differing beliefs, they cannot reach an agreement. The U.S. and North Korea need to have a new round of dialogue to narrow down the differences that they found in Hanoi. The negotiation will never be easy, but they need to make more efforts on the working-level negotiation rather than the town-down one. When the U.S. demands the CVID or FFVD on North Korea, the North demands the CVIG or FFVG (Guarantee) from the U.S. Thus, there is a dilemma between denuclearization and a peaceful regime on the Korean Peninsula. Unless the dilemma is resolved between the U.S. and North Korea, the breakdown in Hanoi may be repeated in the future.

Hwang Jihwan is Professor in the Department of International Relations at the University of Seoul.  His research interests include a diplomatic policy and Relationship between South and North Korea.