The Hanoi Summit – We Asked John Van Oudenaren What Happens Next in U.S.-North Korea Relations 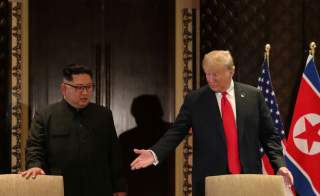 In the weeks leading up to the Hanoi summit, National Security Advisor John Bolton’s Twitter feed contained virtually no mention of North Korea. The only Tweet was a perfunctory note on the eve of the summit, which dryly said: “Good to be in Hanoi with @realdonaldtrump to meet with Vietnamese and DPRK officials. Much to discuss over the following two days.” This contrasts starkly to the rest of his Tweets, which are filled with passionate, often downright angry calls for Venezuela and Iran to submit to U.S. demands. Not incidentally, Iran and Venezuela are the top two current candidates for U.S. military action, which is Bolton’s preferred modus operandi.

As hints about what caused talks to break down have emerged since the summit, it is abundantly clear that Bolton was, at very least, never on board with a gradualist, phased approach to negotiations. He likely also sought to quietly undermine any diplomatic measures that did not amount to issuing North Korea a de facto ultimatum. As my colleague Harry Kazianis observes, even Special Representative Steve Biegun, who many saw as the driver (along with the President himself) of a more sensible step-by-step approach to negotiations, has started using language reminiscent of Bolton’s “Libya Model” (wherein concessions are contingent on total denuclearization): “We are not going to do denuclearization incrementally.” Why a de facto nuclear state would sacrifice its security, and acquiesce to such demands, especially given America’s poor track record of abiding by past international agreements, defies history, logic and virtually the entire canon of security studies literature.

Of course, Bolton has a history of derailing talks with Pyongyang. He played a central role in Bush’s decision to scuttle the Agreed Framework in 2002, and undermined the United States’ lead negotiator, then Assistant Secretary Christopher Hill in the Six Party Talks. At an Asia Society event last year, Hill expressed concern that Bolton would work to derail Trump’s efforts to negotiate with North Korea, “You can have a situation where that person [Bolton] can be in effect sabotaging the President’s desires, and the President may not even figure it out.” At the same event, Robert Gallucci, the lead U.S. negotiator in talks with Pyongyang that yielded the 1994 agreed framework deal, was even less sanguine, saying that Bolton has shown “an enthusiasm for the use of force which I find regrettable.”

The morning after the summit fell apart, I wrote to some close friends with great sadness: “The latest act of the tragicomedy ends with a thud in the Hanoi breakdown….The recriminations will be bad. Hawks in Washington, Pyongyang, Seoul and Tokyo will be emboldened, and argue that engagement is fruitless. They will say, as always, that the solutions are more guns, more (and smaller) nukes, more fire, more fury, more war. The debt will go up, the planet will get hotter, entitlements will be slashed, but by God, we will be able to outgun anyone on this earth.”

At the end of the day, it was perhaps Democratic Representative Ted Lieu who said it best via tweet: “The hashtag #TrumpFail is trending and I find it inappropriate…People should not be hoping the President Fails or taking pleasure in his failure on the global stage. Whether you like [Trump] or not, he represents America in foreign affairs… We want America to succeed.”

Lieu is right, when talks broke down in Hanoi, it was not only a failure of diplomacy but a very sad day for the people of Korea and for America. Hopefully, there are better times to come, but we will have to pass through some dark times to get there.

John S. Van Oudenaren is assistant director at the Center for the National Interest. Previously, he was a program officer at the Asia Society Policy Institute and a Research Assistant at the U.S. National Defense University.