The Hanoi Summit – We Asked Kristine Lee What Happens Next in U.S.-North Korea Relations 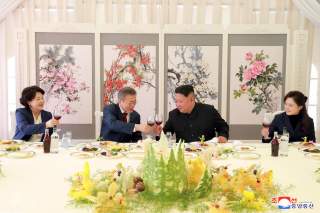 This past year, Kim Jong-un achieved foreign-policy breakthroughs long sought by his family’s regime through a combination of deft diplomacy, a burgeoning nuclear program, and low-level provocations against the United States and its allies. This has included inflammatory rhetoric, missile launches over Japanese airspace, and cyber-attacks on South Korean companies. There was, predictably, a pause in these provocations in the lead-up to the second Trump-Kim summit in February.

But in the aftermath of Hanoi, Pyongyang is likely to pivot away from a conciliatory tack with the United States. Just days after leader-level talks ground to halt, new evidence emerged suggesting that Pyongyang was rebuilding a missile launch site it had previously indicated it was dismantling. The lack of concerted response to such bad behaviors may ultimately solidify Pyongyang’s judgment that they are an effective long-term strategy for setting the terms of engagement with the United States.

North Korea will also more aggressively exploit rifts in major power interests. Shifting perceptions have already positioned North Korea for deeper political and economic integration with regional powers—notably, Beijing, Moscow, and Seoul—even as its capabilities and intentions remain the same. Since the Singapore summit in June 2018, North Korea, China, and Russia have trilaterally ratcheted up pressure to ease UN sanctions on North Korea.  Beijing, in particular, is seeking to ensure that North Korea remains within its economic sphere of influence and has already loosened restrictions on trade with North Korea, casting the Kim regime a vital lifeline while weakening the United States’ diplomatic toolkit. Even so, Trump lavished praise on Xi Jinping for his support, noting in a tweet before boarding his plane to Hanoi that “sanctions placed on the border by China and Russia have been very helpful.”

Given the contending interests at play on the Korean Peninsula, the United States needs to be more disciplined than ever in its assessments of the consequences—positive, negative, and unintended—of granting Pyongyang the diplomatic legitimacy that it did this past year. The unlikelihood of any real structural change in the United States’ relationship with the Kim regime leaves little room for the type of “bold action” that was South Korean president Moon Jae-in’s signature refrain throughout 2018. Rather, it demands a careful, tactically flexible approach— one in which economic, diplomatic, and military pressure can be dialed up or down incrementally and diligent red teaming supports readiness for defense and deterrence.

Kristine Lee is Research Associate with the Asia-Pacific Security Program at the Center for a New American Security.  @kristinejlee27