The Hanoi Summit – We Asked Michael O'Hanlon What Happens Next in U.S.-North Korea Relations 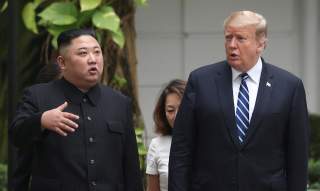 The widespread consensus that the Hanoi summit between president Donald Trump and chairman Kim Jong-un should be declared a failure is premature.

Although it may not have been designed this way in advance, and even though the sausage-making has not been pretty to watch, Trump’s approach to the North Korea problem now has a certain overall logic. Maintain United Nations-approved international sanctions until a deal is struck. Sustain the powerful U.S.-ROK military deterrent (although it is regrettable that Trump’s rhetoric wavers on this matter, American troops are still there, and small-scale exercises have continued even as large ones have been curtailed for now). And use Trump’s personal chemistry with Kim to keep the risks of war within bounds (unlike the case in 2017), while also giving Kim time to decide if he will accept a reasonable deal at the negotiating table.

Kim apparently insisted on the complete lifting of almost all key sanctions in exchange for limited and incomplete nuclear concessions that would have left all of North Korea’s bombs and much of its nuclear industry intact. Trump’s willingness to walk away in Hanoi was welcome in this regard. Only time will tell if Kim now reassesses his options and comes back with a fairer proposition.

Kim may be just as brutal a leader as his father. But his relative youth, and his different perspective on the world, change the situation substantially. Now, with decades of rule potentially ahead of him, and with a nuclear deterrent of several dozen warheads under his belt, he shows some interest in reform and detente. His “byungjin” strategy of development aspires to maintain a strong nuclear deterrent and a reforming, growing economy. By showing a willingness to tolerate some parts of the North Korean nuclear arsenal at least for some time, while lifting sanctions and encouraging foreign investment in exchange for the elimination of nuclear production capabilities, President Trump is making a smart offer to Kim. It may ultimately prove hard for the North Korean dictator to turn down.

Of course, that is a choice for Kim. No American or South Korean strategy can ensure success in nuclear negotiations; we can only establish the parameters and boundaries within which Kim will decide on his next course of action.

Trump has, with his outreach to Kim, effectively taken “bloody nose” military options off the table. But they were never good ideas to begin with, so we should breathe a sigh of relief about this development rather than lament the loss of American coercive leverage.

To be sure, throughout any future attempts at diplomacy, economic pressure must be preserved even in the face of Chinese, South Korean, and Russian desires to relax it. And the U.S.-ROK military alliance must be undergirded by more numerous, smaller exercises as well as various modernization and readiness enhancements, even as the large exercises are suspended. And we probably should not reward Kim with a third summit absent some real hope that he will then deliver. But there is a chance he will.

Michael O’Hanlon is the Senior Fellow and Director of Research of the Foreign Policy Program at The Brookings Institution. He specializes in U.S. defense strategy, the use of military force, and American national security policy.