The Hanoi Summit – We Asked Neil Bhatiya What Happens Next in U.S.-North Korea Relations 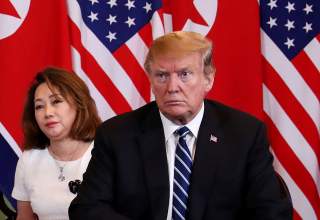 With the suspension of the summit in Hanoi between President Donald Trump and Chairman Kim Jong-un, the diplomatic process to resolve the status of North Korea’s dangerous weapons of mass destruction program has suffered a significant, though not fatal setback. Evidence that North Korea may be restarting work at one of its missile sites is not surprising. Pyongyang and the Trump administration areexperiencing a profound disconnect about what kind of deal is within reach.

So that the American public can better understand where the president thinks this diplomatic effort is going, Congress should take an active role in compelling the administration to delineate its strategy, and why the summit in Hanoi went awry. During the first two years of the Trump administration, Congress did not hold a single hearing asking for answers its approach to North Korea’s nuclear program, or its strategy for dealing with Kim. It is time for that to change.

As with recent hearings on Russia and Venezuela, Congress must use its oversight power to compel the administration to describe its negotiation strategy. While some hearings on North Korea have been held this year, they have not featured executive branch officials. Secretary of State Michael Pompeo and Special Envoy Stephen Biegun should tell Congress: why North Korea thought it could get substantial sanctions relief for modest denuclearization steps; what it envisions the next steps in the process are, including whether Kim is willing to meet the president again; how it is attempting to resolve definitional differences as to what “denuclearization” means; and how close U.S. allies are responding to the post–Hanoi fallout.

Beyond a public accounting of whether the administration is pursuing a sound negotiation strategy, Congress should put itself in a position to help the administration exert leverage over Pyongyang. To help the administration with its coercive economic pressure on North Korea, Congress can add to the sanctions and counter threat finance toolkit by exploring what financial transparency measures can be addressed in new legislation. North Korea uses a sophisticated network of trusted agents around the world to evade sanctions and procure materials for its WMD programs. Lax U.S. regulations around the creation of anonymous corporations greatly facilitates this effort. Congress should continue to monitor the implementation of a new customer due diligence rule to help financial institutions keep illicit networks out of the U.S. financial system.

Congress is well-placed to get the U.S-North Korea diplomatic track restarted. It should start now to make that a reality.

Neil Bhatiya is an Associate Fellow with the Energy, Economics, and Security Program at the Center for a New American Security. @NeilBhatiya