The Hanoi Summit – We Asked Patricia Schouker What Happens Next in U.S.-North Korea Relations 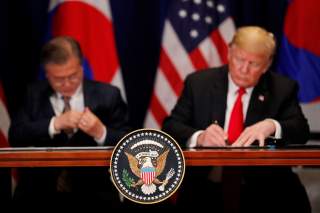 Can we blame President Donald Trump for trying to break with the weight of history? Can we blame Kim Jong-un for playing with time? Following the Vietnam summit, there are no clear indications as to whether—or even if—there will be further progress. The Washington-Pyongyang relationship represents the perfect example of a confrontation between an asymmetric strategy by the United States and the asymmetrical capabilities of North Korea.

Trump has found himself immersed in the same quagmire that his predecessors experienced—one where both sides became almost intractable in their demands. While the initial warm-up between Washington and Pyongyang is not dead, the dynamics of the talks on the denuclearization of North Korea are, at best, stalemated. Talks will likely only resume at a much slower pace and likely not before the end of Trump’s current term.

Time is on the side of Kim—who at only thirty-five years of age can easily wait out his counterpart in the hopes of encountering a perhaps more benign Washington administration. In addition, China will continue to support North Korea against even more likely prohibitive sanctions. Kim’s continuation of Pyongyang’s “military first” policy will also serve as a restrictive measure in any resumption of talks.

Washington must accept that complete denuclearization of North Korea—despite Kim’s rhetoric at the last summit to the contrary—will never occur. Sanctions, while debilitating, will never bring about regime change. Furthermore, the collapse of the regime is a weaker prospect today than a few years ago. Kim’s economic reforms remain modest and insufficient but are aligned with the Chinese model, and living conditions are infinitely better in North Korea in 2019 than they were in the 1990s. North Korea is a totalitarian regime that could, in the manner of what China proposed, gradually turn into an authoritarian regime, with greater freedom, but maintaining the state-party institutions unchanged.

Such a change will not happen in a few months, or even in a few years, and is no guarantee that such reforms will result in denuclearization. Perhaps all that can be hoped for at this juncture is the maintenance of the recent status quo—a slight reduction in the previously bellicose activity on the part of Pyongyang and the furtive hope that some semblance of meaningful dialogue—most likely at lower echelons—will re-emerge.

Patricia Schouker is an energy and security analyst based in Washington D.C. She is a Non-Resident Fellow at the Payne Institute Colorado School of Mines and an Associate Member of New College, Oxford University. Twitter: @Patricia_Energy