The Hanoi Summit – We Asked Patrick Cronin What Happens Next in U.S.-North Korea Relations 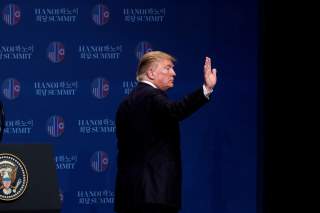 The Hanoi summit was a blow to the great-man theory of history. Rather than provide a grand platform on which influential leaders could exercise their herculean agency, Hanoi laid bare the colossal constraints encumbering the statecraft of the democratically elected and dynastically imposed alike. President Donald Trump could not provide sufficient incentives to persuade North Korean Chairman Kim Jong-un to take a serious step in the direction of denuclearization, and Kim was unwilling to make a step, whether small or large.

This revelation bodes ill for achieving a sustainable, denuclearized peace on the Korean Peninsula. The return toward maximum pressure, deterrence, and containment seem almost inevitable. While Kim could spare the world this inexorable trajectory, all indications (including possible preparation for a rocket launch) suggest he may accelerate it.

If there is any silver lining, it is to recall that hope emerged when tensions surged. A successful intercontinental ballistic missile test in late 2017 prompted Kim to declare his military mission accomplished, paving the way for unprecedented diplomacy throughout 2018. A historic first encounter in Singapore ended in a feel-good declaration of intentions. Effectively, the two sides agreed to a moratorium on nuclear and missiles tests in exchange for throttling back on the U.S.-South Korean military posture (a tacit freeze-for-freeze).

The second summit could have resulted in a modest step forward—by extending the moratoria to include all of North Korea’s fissile material production. But Kim wanted to trot out the old Yongbyon facility for significant sanctions relief. He cared little for a hollow peace declaration or liaison office. The North Korean gambit was a non-starter, and Trump stress-tested Kim on the notion of a grand bargain (a complete elimination of WMD in exchange for real economic development). Kim balked, and Trump wisely ended the meeting amicably.

If Kim truly wanted to be a great man in history, he could make the leap. But Kim appears nothing more than a tyrant, destined to be North Korea’s last “emperor.” Unless Kim surprises the world with a bold volte-face, diplomacy will either grind to a halt or trudge on despite the absence of results. It was important for Trump to try, but the amicable return to more pressure is all but assured.

Dr. Patrick M. Cronin is the Chair for Asia-Pacific Security at the Hudson Institute and co-author of the recent report, Negotiating with North Korea: How Will This End?