The Hanoi Summit – We Asked Stephen Noerper What Happens Next in U.S.-North Korea Relations 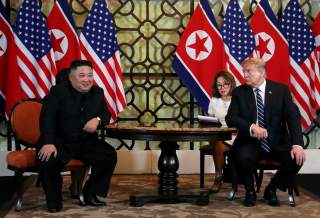 First, we need to pause and properly define the Hanoi Summit in context. It was not the unmitigated disaster many observers termed it. It is step two in a likely long and arduous process that will entail breakoffs, walkaways, and other setbacks that will accompany denuclearization in all its complexities. Moreover, the two sides are overcoming seventy years of hostility. So let’s take it in stride with a longer view. Both leaders described the benefits of the meeting, and a moratorium on nuclear and missile testing remains in place. President Donald Trump also described in his press debrief the importance of partnership with the United Nations and several nations—South Korea, Japan, Russia, and China—and how bilateral American-North Korean negotiations will proceed better with multilateral cooperation apace.

In a call aboard Airforce One post-summit, Trump deferred to South Korean President Moon Jae-in, who has righted the rudder and kept the ship straight several times this past year. It is the South Koreans, initially shocked by the breakoff, who have offered the forward-most perspective: calls for semi and unofficial dialogues to buttress official negotiations, and the offering of economic incentives over time. This is where the South Korea-U.S. alliance will show new vitality in bringing North Korea back to the table.

Both the United States and North Korea largely have been tempered following Hanoi. Washington has floated a possible third round of talks, while professing no illusions about possible North Korean missile activity. The U.S. special representative Stephen Biegun pronounced diplomacy still very much alive. Meanwhile, the North Koreans released a film of their leader Kim Jong-un in Hanoi, and only a week later cast rather soft fault on the Americans for the breakdown—an unusual post-negotiation approach. It’s important to silence the noise and listen carefully for signs of receptivity to the next round of talks. Reagan and Gorbachev walked away and then returned to strike agreement; the North Koreans see themselves in that guise.

What if the North Koreans launch a satellite as they did after the Leap Day accords? Take it in stride. Timing would be around the April 15 anniversary of Kim Il-sung’s birth, and no surprises have come from Sohae. A satellite test might be just that and aimed more at internal legitimacy. Rather than overreact—we’ve full knowledge of the lethality of North Korea’s missile ranges, which with the November 2017 test implies the ability to reach the continental U.S.—look toward creative alternatives. For instance, might China, Russia or Kazakhstan do this for them in ways that don’t threaten regional security?

Ahead are rocky roads and a plethora of obstacles around denuclearization and other topics of concern, to include human rights. But talk is better than tension, and patience and perseverance the best way forward. Everyone knows the score; it’s simply a long match with lots of timeouts.