The Hanoi Summit —We Asked Graham Allison What Happens Next in U.S.-North Korea Relations 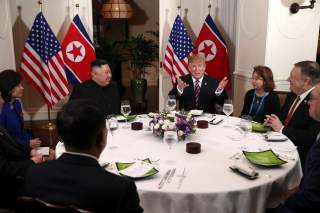 Yogi Berra warned against making predictions—“especially about the future.” But the real world offers no opportunity to opt out. Embedded in the specific charges made by the press and Blob in their nearly-unanimous declaration of Trump and Kim’s Hanoi summit a “failure” are unstated bets about what will happen next. Consider two on which I’m prepared to bet against two friends and colleagues.

Declaring the “collapse” not just an embarrassment but dangerous, The New York Times lead story the day after the summit foresaw a “new era of nuclear tension.” According to David Sanger, the price of failure will be “high—especially if Kim responds by further accelerating his production of nuclear fuel and a frustrated Trump swings from his expression of ‘love’…back to the ‘fire and fury’ language.”

Of course, either or both are possible. But I’m prepared to bet that the words and actions of both leaders and governments in the next six months will be more like what we’ve seen during the bromance of the past year than the provocations of 2017.

The Blob has indicted Trump for gross “diplomatic malpractice” in having a second summit without a prearranged deal. In CFR President Richard Haass’s summary: “The Hanoi summit showed the dangers of a president who over-personalizes diplomacy.”

While these assessments are certainly correct about normal diplomacy with normal countries, this consensus view ducks two inconvenient questions. First, how have previous administrations following that counsel fared? As Michael O’Hanlon put it pointedly, “over 24 years...the record of traditional approaches to North Korea has been unblemished by success.”

Second, in dealing with an authoritarian regime whose officials believe their nation’s nuclear program is its greatest success, is there a better option than to try to change the mind of the man at the top? That was Reagan’s conclusion when he engaged in much-criticized “personal diplomacy” with Gorbachev that ended not only in an INF agreement that zeroed out all the Soviet Union’s intermediate nuclear-armed missiles but also led him to believe that he could transform his regime.

Because the denuclearization of North Korea is an extraordinarily ambitious objective, the odds of success are low. Nonetheless, I’m prepared to bet that despite his unorthodox approach, at the end of his first term, Trump will have been more successful in checking North Korea’s nuclear advance than either Bush or Obama were during their combined sixteen years in office.