Here's What Would Happen If Kim Jong-Un Suddenly Died 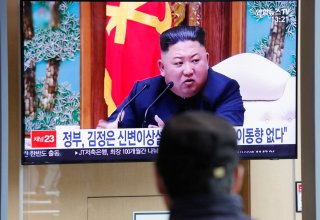 The sudden death of North Korean leader Kim Jong-un will act as an Achilles’ heel of international politics in Northeast Asia, where the balance of power is maintained, as well as on the Korean Peninsula. The impact of his sudden death will be analyzed on a dual-level, both domestically and abroad. Domestically, his death will undermine the durability of the Kim family’s dictatorship. In particular, various changes in Pyongyang’s inner power system will occur, such as whether the Kim’s three generations of hereditary regime will continue or not.

His younger sister, Kim Yo-jong, who has played the number two role since the end of last year, will temporarily be at the forefront of power. However, in the absence of absolute power, her temporary power will not last long in North Korea’s patriarchal society. After a year or so of transition, a collective leadership system will emerge, as was the case after the deaths of the Soviet Union’s Stalin and China’s Mao Zedong in the past. China will also focus on stabilizing Pyongyang by constructing a pro-Chinese shadow cabinet.

Next, various changes will occur in the balance of power by maintaining the status quo of the international situation in Northeast Asia. China expects at least 3 million North Koreans to move from North Korea to the Chinese border to survive. China will provide emergency supplies to stabilize the situation in the North Korean region on the Korean Peninsula and will do its best to prevent the collapse of security. In particular, Beijing’s military will prepare to mobilize forces in case of various scenarios, such as if the ROK-U.S. alliance sends its forces northward from the Imjin River near the Demilitarized Zone to the Pyongyang Daedong River-Wonsan Line. The Chinese leadership will focus on preventing the collapse of the buffer zone between the maritime and continental forces.

Eventually, a full-scale dialogue between U.S. and Chinese leaders will be needed. Russia and Japan, which are considered to be traditional stakeholder interests, will also mobilize to minimize the negative impact of the situation on the Korean Peninsula. Inevitably, military tensions on the Korean Peninsula will increase.

Professor Sung-wook Nam is Dean of the Graduate School of Public Policy at the Korea University.