How America Can Work to Solve the North Korea Challenge: Talk to China 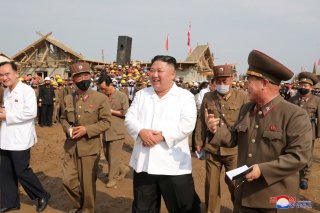 North Korea has bedeviled presidential administrations for decades, and there has yet to be a solution. Short of regime change, finding the right mixture of U.S. sanctions and inducements to persuade North Korea to give up peacefully its nuclear weapons is an aspiration that will likely not be achieved while the Kim dynasty remains in power, regardless of whether President Donald Trump is reelected or not. With China’s rise, a major complicating factor is that Washington is no longer truly even in a controlling position to call the major shots on coming up with a solution for North Korea’s nuclear force. The power to influence events on the Korean Peninsula has transformed since the war ended sixty-seven years ago. The path to peace between Washington and Pyongyang will first have to go through Beijing.

In the initial decades after the Korean War ended in 1953, the focus was on finding permanent peace between the North and South, and avoiding a resumption of conventional war across the DMZ. The United States’ main role in those years was to supply the conventional force necessary to protect South Korea from another invasion by its more militarily powerful neighbor. Up to 75,000 U.S. troops were stationed in the South over the next decades, and countless provocations against U.S. forces by North Korea (shootdown of aircraft, seizure of the Pueblo, axe attacks on U.S. soldiers) were diplomatically endured and handled. Still, the focus was on finding a permanent peace between North and South, and preventing the outbreak of another full-scale, conventional war on the Korean Peninsula. China was not a major part of the Korean peace equation for the United States, as it did not even have diplomatic relations with Beijing in that era.

Historically, those now look like the good old days. Toward the end of the twentieth century, the North began a nuclear weapons development program aimed at deterring, from its point of view, the United States from attacking the North. As years passed, the United States watched as North Korea made steady progress toward achievement of that goal. Gradually, the central tension between the DPRK and the United States switched from preventing another invasion of the South to confronting the ugly reality that someday North Korea might be capable of attacking U.S. and South Korean forces or territory with nuclear weapons. Meanwhile, China emerged from the Cultural Revolution and began its gradual emergence onto the world stage, which accelerated after President Richard Nixon’s historic trip to China in 1972.

In essence, notwithstanding decades of U.S. diplomacy while it was still the military hegemon in Korea and the region, the strategic situation for the United States went from bad to worse. On October 9, 2006, North Korea exploded its first nuclear device. In the years leading up to North Korea’s first nuclear test, Washington engaged in intense diplomatic efforts to dissuade the North from developing such capability. Successive administrations either tried to stop North Korea’s development program, or, after 2006, tried to persuade North Korea with enticements to denuclearize. Nothing worked. Instead, North Korea continued to steadily build its nuclear weapons arsenal, and now may even be on the brink of having the capability to have those weapons reach the United States on ICBM missiles. And adding insult to injury, during the last twenty years the United States has spent over $1 billion dollars in aid, and partial sanctions relief for North Korea, all in a totally unsuccessful effort to try to keep the North from doing precisely what it has done, build nuclear weapons.

To come up with a plan going forward, this history has to be considered. More of the same, i.e. more U.S. bilateral initiatives and proposals, is not the solution. The military and diplomatic power of the United States is no longer what it once was in the region. Even worse, North Korea now enjoys a measure of nuclear deterrence against the United States which the Kim family dynasty doubtlessly does not want to surrender in the current environment.

Going forward, the most important strategic reality which must be taken into account is that China has become a peer player with the United States in the region. (Some might argue that China has become the major player.) In purchasing power parity terms, China is already the world’s largest economy. China’s navy has become the largest in the world and is concentrated along its own coastline and in the Yellow and China Seas, unlike the U.S. Navy which is stretched across the globe. China’s regional maritime power is backed up by 1,600,000 ground troops, nuclear weapons, and thousands of conventional missiles capable of striking nearby American overseas bases, ships and air targets. China’s border with North Korea is 880 miles long. China by far is North Korea’s most important economic partner and influential, supporting lifeline. It is perfectly obvious that China has an overwhelming strategic interest in what happens on the Korean Peninsula and has considerably more potential military, economic and political leverage to bring to bear over the North than does the United States. China would be in the most powerful and persuasive position in any deal to help guarantee North Korean security in exchange for giving up nuclear weapons.

The United States is in a tough strategic spot. To move forward with the North, it must likely either accept nuclear deterrence as the status quo while waiting for history to bring the Kim dynasty to an end, or it must craft a new approach that better reflects the strategic balance in the region as it exists today, not in the bygone era when the United States was the top player. This is a tough pill for Washington to swallow because it inevitably means that the road to a solution first has to go through Beijing, not directly from Washington to Pyongyang. With all the other tensions between China and the United States, bringing the Chinese more intensively into discussions will be a steep diplomatic challenge, and not easy for U.S. diplomatic pride, but anything short of that is likely doomed to continued failure.

Opening real substantive talks with China about developing a common formula to solve the challenges of the Korean Peninsula will no doubt necessitate opening an equally difficult discussion about the strategic role played by the two great powers in that region and the world. With relations between Washington and Beijing steadily going downhill, it is hard to imagine how cooperation on North Korea and nuclear weapons can be accomplished within the near future. Tariffs, Taiwan, the China Seas, trade policy, data security, technology theft, TikTok, and Hong Kong, are all complicating issues making any cooperation on Korea look even more bleak. China is probably perfectly content to let the United States twist in the wind over its North Korea problems given all the other tensions in the U.S./China relationship. But sooner or later, the United States will inevitably have to come to the table with China if Washington truly wishes to find a permanent solution for North Korea. Short of that, the United States is likely going to have to resign itself to an unpleasant status quo where the only option is to continue to let nuclear deterrence do its quiet work with Pyongyang. What is not clear is whether Washington is prepared yet to develop a Korea strategy, going forward, that is realistically based on this geopolitical state of affairs.