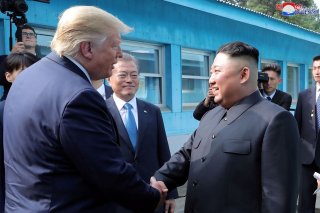 Each day, coronavirus runs rampant throughout the world. As of this writing, there have been over 1,041,126 coronavirus cases globally, while the death toll has exceeded 55,132. The United States alone accounts for approximately 24 percent of the world’s cases.

No one is immune to the crisis, not even North Korea. Several reports claim that nearly 10,000 are in quarantine, while 180 North Korean soldiers have died. Despite these reports, North Korea vehemently denies any outbreak. In fact, as if to show their defiance in times of international crisis, Pyongyang continues to launch missiles.

The most recent launch came on March 29, with North Korea launching what appeared to be two short-range missiles toward the Sea of Japan. March has seen North Korea conduct three tests, the largest number of tests in a single month. After each test, Pyongyang seems to be provoking a response from the world, and in particular, the United States.

So far, that has not happened, with Washington remaining exceptionally quiet. The only countries to have actively responded to North Korea’s actions have been its neighbors South Korea (denouncing tests as inappropriate) and Japan, as well as six European countries (Belgium, Estonia, France, Germany, Poland, and the United Kingdom).

Just as recently as April 1, the United Nations Security Council failed to unanimously condemn the launches. As the world mulls over what to do with North Korea during the coronavirus crisis, the United States’ response will set the tone for future engagement with the Hermit Kingdom.

What Washington Should Do

If reports are to be believed, North Korea is about to be overrun and possibly destabilized by coronavirus cases. In such a state, Washington should refrain from making any hasty decisions such as forcing regime change. Ensuring the survival of the Kim regime is the first step in ensuring no rash decisions are made by its leader. History tells us that the Kim family would rather fight to the bitter end than submit to foreign powers.

Therefore, President Trump’s maximum pressure strategy must be rolled back, replaced by a strategy designed for patient negotiation. The United States should be ready to compromise and give Pyongyang some of what it demands—not as a sign of giving in, but as a way of averting conflict and moving toward permanent peace on the Korean peninsula.

Say No To Denuclearization, Yes To Arms Control

So what exactly would such a strategy entail? What would be different from previous failed attempts? A major reason for the lack of a deal has been deep mistrust. The United States sees North Korea as unfaithful, never agreeing to cut back on its weapons stock. North Korea, on the other hand, views the United States as a hostile force constantly attempting to destroy them. In short, the constant risk of invasion and looming threat of annihilation “force” North Korea to remain nuclear.

For any breakthrough, the United States should use this coronavirus crisis as a negotiating chip to get its way back to the negotiating table. Kim Yo-jong, Kim Jong-un’s sister, penned a letter to President Trump commending him for his close relationship with the Chairman, while also stating that if “unilateral and greedy intention is not taken away,” no deal would be considered.

While this can be taken as a lack of enthusiasm toward a deal, it can also be viewed as a willingness to negotiate so long as denuclearization (what Pyongyang sees as Washington’s unilateral, greedy intention) is off the table. A show of goodwill must begin the process of building trust. In this case, humanitarian aid from America and a reopening of official communication channels might help persuade Pyongyang back to the table.

From there, the goal should be arms control, not denuclearization. As Stanford University nuclear physicist Siegfried Hecker says, North Korea could retain some functional nuclear arsenal. The objective would be to lock weapons down at its current capacity. The three No’s—no new weapons, no better weapons, and no transfer of technology or weapons—should be the guiding principle for any strategy going forward. Without accepting that North Korea is far too invested in nuclear weapons to reverse course, no talks stand a chance of succeeding.

Past failures tell us that any negotiation with North Korea will be difficult. The Agreed Framework of 1994, the Six Party Talks in 2005, and the Leap Day Deal in 2012 show that a simple aid-for-nuclear program termination exchange won’t work. Pyongyang will most likely reap the benefits and walk away. However, there is reason to be optimistic about reaching a deal.

North Korea has made strides to meet the provisions outlined in past agreements. The issue is not just on Pyongyang’s side, but on Washington’s side as well. In the 2012 Leap Day Deal, North Korea agreed to commit to a joint statement and refrain from testing, in exchange for aid and a non-aggression promise from the United States. While a launch ultimately ended negotiations, mixed signals from Washington—severe sanctions, joint exercises with South Korea, and a push for Six Party Talks Pyongyang was not interested in—contributed greatly to its failure.

With that in mind, the United States should pursue a similar exchange with North Korea. This time, though, Washington should provide a brief grace period before enforcing the deal, allowing Pyongyang to prepare to maintain their current stockpile. In exchange, the United States would provide aid, sign a non-aggression promise, and limit joint exercises with South Korea to annual or biannual sessions. Washington could also conclude the transition of operational control (OPCON) to South Korea as a gesture of goodwill to Pyongyang. Washington can assure Seoul of its continued support through the UN Command in Korea and intelligence/logistical support.

Whichever strategy the United States pursues, challenges lie ahead. However, one thing is clear. The United States must discard the idea that full and irreversal denuclearization is possible in the Korean peninsula; it must therefore shift gears and look to lock Pyongyang’s stockpile at its current level. Whether this is possible depends solely on U.S. commitment and improved coordination with its allies.