How This Chinese Submarine Crew Died Is Sickening 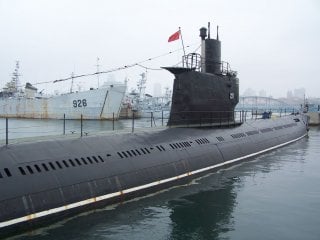 China’s 361 submarine was discovered adrift off the coast of China with all hands dead at their stations. What happened?

A miniature flotilla of Chinese fishermen were plying their nets in the Bohai Sea, just off of China’s coast and not far from Beijing. Though they were hoping to catch something of an aquatic nature, they noticed something rather strange. They saw a metallic rod sticking out of the ocean—a submarine periscope.

The Sino-Soviet Treaty of Friendship and Alliance had resulted in a considerable amount of technology transfer from the Soviet Union to Communist China. In the realm of naval warfare, one of the transferred technologies was the Soviet Union’s Romeo-class submarines.

The Ming-class was nothing spectacular. It was based on post-war Soviet designs from the early- to mid-1950s. Though the Ming-class incorporated a number of upgrades compared to the original Soviet design, including increased underwater endurance and better underwater acoustics, the Ming-class is wholly obsolete in comparison to contemporary submarine designs. Submarine hull number 361 was one of China’s Ming-class newer variants, and was not considered old by submarine standards at the time of the accident.

During a press conference, a Foreign Ministry spokesperson discussed 361’s mishap rather blandly, simply stating that the submarine was “training in our territorial waters east of the Changshan Mountains, all 70 officers and soldiers on board were killed due to mechanical failure,” and provided no further details.

The spokesperson ruled out any theories of foul play by explaining that the 361 was on routine patrol, “submarine 361 was a major loss for the People’s Navy. We express our deep condolences to all officers and soldiers of the submarine who were unfortunately killed in the execution of training tasks, and sincere condolences to the relatives of the killed officers and soldiers.”

The 361 had been on patrol for approximately 10 days. PLA Navy investigators towed 361 to land, and found the entire crew, plus 14 naval cadets who had been aboard for training, slumped over at their stations. Oddly, the 361 had not sunk to the ocean floor, indicating there hadn’t been an onboard explosion. There were no signs of a struggle—or even any indication that the crew members realized something was wrong.

The People’s Liberation Army is notoriously tight-lipped when it comes to military affairs, so speculation on the cause of the disaster remains just speculation. One of the leading theories is that the 361’s onboard diesel generator malfunctioned and did not shut down correctly, which could have used up all of the onboard oxygen. The crew likely suffocated at their posts without any indication of the danger that was present.