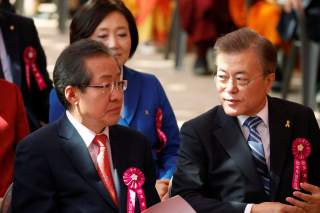 Springtime is a nationwide celebration in South Korea. After emerging from the winter freeze, many are anxious to get back to the thawed-out mountains or enjoy the cherry blossom trees that adorn the streets and city parks. While the weather is the subject for songs and smiles, spring is also home to the somber anniversary of the May 18 Gwangju Democratic Movement. This event is not only a defining moment in the country’s history but also symbolic of the modern struggle in Seoul to form sustainable policy on North Korea issues.

After the October 1979 assassination of President Park Chung-hee (the ex-general who had ruled the country since 1961) many citizens demanded democratic reform. Pro-democracy protests, which authorities cracked down on in the name of preventing socialist infiltration from North Korea, erupted in the spring of 1980 in the southwest city of Gwangju. Chun Doo-hwan, another ex-general, took power that year and mobilized paratroopers to violently quash the protests. Hundreds of people died over a ten-day span, and the events were covered from public knowledge.

Nearly forty years on, the Gwangju Democratic Movement remains prominent on the national consciousness in part because its interpretation remains highly controversial. According to right-wing hardliners, the clashes between the citizens and military were instigated by North Korean subterfuge intended to overthrow the government in Seoul. Though this claim has been thoroughly debunked by eyewitnesses and the United States government, it has lingered in far-right circles. This past February, three members of the conservative Liberty Korea Party (LKP), the main opposition party, invited a commentator well-known for supporting this belief to a public forum. Many conservatives condemned the actions of these lawmakers, and the LKP removed one involved from the party. However, another came in third in an internal party vote to lead the LKP just weeks after the uproar.

The divisive narrative surrounding Gwangju is one of the many examples of how political tribalism regarding North Korea influences the overall political discussion in South Korea. Many current South Korean leaders’ views of domestic politics and relations with North Korea were formed as they came of age during the democracy movements of the 1980s, including current president Moon Jae-in, who spent much of his formative years fighting the government as a human-rights lawyer.

Now, these staunch differences have manifested in opposing ideologies. Though South Korea would greatly benefit from even the most basic of bipartisan frameworks to guide the enormous challenge of dealing with the North, the positions of the conservatives and liberals are underwritten by deep-rooted mistrust of the other side. The liberal stance advocates dialogue and economic incentives to lower the military threat from Pyongyang. The Right views these measures as pro-North Korean, warning against trusting Pyongyang and instead advocates maintaining pressure on the Kim regime.

In 2018, President Moon was able to execute much of his vision due to a combination of the mood surrounding North Korean-American diplomatic detente—which the South Korean president played an integral part in facilitating—and his domestic political mandate. Now, negotiation has reached a prolonged stagnated state over fundamental denuclearization and sanction relief issues between Pyongyang and Washington. In order to jump-start foundering diplomacy, Moon has been exhausting all options, including sending humanitarian aid to the North and appealing to the United States to allow the resumption of inter-Korean economic projects. He has also called for another inter-Korean summit. But this time around, besides attempting to bridge to widening gap between Pyongyang and Washington, Moon is facing stronger opposition at home from a revived conservative party.

Though still recovering from the calamitous end of the previous administration, which saw former President Park Geun-hye impeached and imprisoned, the LKP has been emboldened by Moon’s unpopular domestic policies and recent missile tests from North Korea. Moreover, the conservative agenda of opposing dialogue with Pyongyang will likely grow stronger, particularly if North Korea continues expressing dissatisfaction through military provocations. If the conservative parties gain a majority of seats in the National Assembly in parliamentary elections next spring, the domestic waters Moon must navigate will become even more treacherous.

Political entrenchment also makes it unlikely Moon will make serious efforts to reach across the aisle for support. Reaching a position on North Korea acceptable to the Left and Right would require compromise, introspection, and confrontation with history by both sides. The Left would need to take a firmer stance in cases of North Korean intransigence during periods of dialogue. Conversely, the Right would need to produce policy ideas beyond merely treating any form of inter-Korean cooperation as a capitulation to Pyongyang and betrayal of the military alliance with the United States. Seeing as recent electoral and prosecutorial reform bills resulted in physical altercations at the National Assembly, the probability of cooperation over anything in Seoul is essentially zero.

Meanwhile, outside of the political world, South Korean public opinion on North Korea issues is mostly centrist. Polls show that the population supports both dialogue and de-escalation measures with Pyongyang as well as maintaining the strong U.S.-South Korean alliance. This means that there is space for South Korean leaders to build a consensus on North Korean affairs. But instead, both parties are racing away from the middle ground.

This May 18, on a sunny Saturday in Gwangju, President Moon made a speech at the memorial to the victims and called for an end to partisan interpretation of the tragic event. He also encouraged lawmakers to move forward on the fact-finding commission, which, eight months after the legislation to form the committee was passed, still has not been officially launched due to political disagreements. Conservative lawmakers who attended were met with fierce protests from locals.

Ultimately, the image of politicians from the Left and the Right facing hurdles to stand together over interpretations of the past is an omen of the prospects of standing together on the future of North Korea affairs.

Nate Kerkhoff is the Asia-Pacific Fellow for Young Professionals in Foreign Policy. He received his MA in Global Affairs from Yonsei University in Seoul, South Korea.