How History Can Actually Solve the South Korea-Japan Crisis 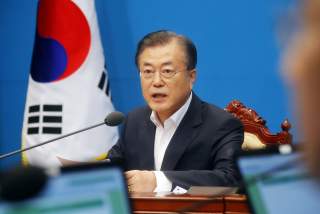 Korea-Japan relations, already strained by South Korean Supreme Court rulings last fall ordering Japanese companies to compensate World War II victims of forced labor, began breaking down across new issue areas this summer with no clear resolution in sight. These countries, both U.S. treaty allies, have quarreled over historical issues tied to Japan’s 1910-45 colonization of Korea several times in the past. But recently their political spats have bled into the economic and security dimensions of their relationship in unprecedented ways, with implications for global supply chains as well as Washington’s capacity to respond to regional security challenges from North Korea and China.

Despite this grim situation, previous cycles of contention provide insights on how to turn shaking fists into handshakes. South Korean President Moon Jae-in’s conciliatory tone toward Japan in his August 15 statement marking the anniversary of the end of Japanese colonial rule was a good first step, resembling moves that helped to reset relations following past episodes of bickering. To consolidate this positive turn, Seoul and Tokyo should take advantage of additional upcoming opportunities to dial down tensions, starting with renewing an important bilateral intelligence-sharing agreement this week on August 24.

Ties in a tailspin with high stakes

In early July, Japan restricted bilateral economic ties with South Korea for the first time since their 1965 normalization of relations. Japan tightened export controls on materials essential for South Korea’s production of semiconductors and displays. While Tokyo has cited vague security concerns for these actions, Seoul views them as retaliation for its Supreme Court rulings. On August 2, Japanese Prime Minister Shinzo Abe’s Cabinet approved the further step of removing South Korea from a so-called white list of countries that are allowed relaxed export procedures for a number of items with possible military applications. Thereafter, on August 12, South Korean President Moon Jae-in moved on plans to remove Japan from Seoul’s own list of preferential trading partners. South Korea’s deputy national security adviser also threatened to withdraw from the bilateral General Security of Military Information Agreement (GSOMIA), which is critical to intelligence sharing in the wake of North Korean provocations.

In addition to the mounting economic costs of this dispute, security conditions in the region are deteriorating. North Korea has tested short-range missiles and projectiles six times since late July. And on July 23, South Korean defense officials reported that Russia violated its airspace for the first time during joint military exercises with China. Absent bilateral cooperation, South Korea and Japan, along with the United States, are in a much weaker position to address these challenges. On the flip side, North Korea and China will only be further emboldened by deepening rifts between their regional rivals.

Restoring cooperative relations is essential and urgent, but it will not be easy. Publics in both South Korea and Japan have rallied behind hardline actions and nationalist rhetoric in recent weeks. Conventional wisdom dictates that surges in nationalism tie the hands of leaders in the context of international disputes. But an examination of de-escalation processes from previous episodes of Japan-South Korea contention suggests that band-aids to stop the bleeding—if not completely heal underlying wounds in this relationship—remain within the reach of Moon and Abe.

Three de-escalatory lessons from the past are useful in identifying opportunities for Seoul and Tokyo to defuse tensions in the coming days and weeks.

In the past, wild card events like North Korean missile or nuclear tests and financial crises provided political space for leaders in Seoul and Tokyo to back off from hardline stances in their bilateral disputes. Considering the shifting context, the South Korean and Japanese publics in these cases generally understood the need to tamp down tensions to cooperate on more pressing issues.

For instance, in 1996, then-South Korean President Kim Young Sam ramped up tensions over contested islands referred to as Dokdo in Korea and Takeshima in Japan by building a new pier on one of the islands and reinstating military exercises nearby. With the onset of the 1997 Asian financial crisis, however, Kim saw the need to seek Japanese economic assistance and toned down his tough stance on the islands.

Similarly, a phase of strained ties from 2005-06—which involved a Japanese prefecture’s establishment of “Takeshima Day” and South Korean President Roh Moo-hyun’s warning about a “diplomatic war” between Seoul and Tokyo—de-escalated following North Korea’s long-range missile and nuclear tests in 2006.

Considering these past trends, the Moon administration should cite the North Korean missile tests and China-Russia joint exercises as rationales for continuing Japan-Korea security cooperation, specifically the renewal of GSOMIA on August 24. The South Korean public is more likely to support this move if its leaders emphasize the urgency of coordinating security postures and sharing intelligence in the face of fast-developing regional threats.

Lesson 2: Export-oriented businesses avoid getting swept up in nationalism, providing leaders with steady sources of support for de-escalation.

South Korea and Japan are each on one another’s lists of top five trading partners, and both countries rely on exports to fuel their economies. The preferences of export-oriented businesses , therefore, matter to politicians and to the publics at large.

During previous phases of South Korea-Japan contention, these groups have quietly kept economic channels open, hoping to insulate their bottom lines from political battles. On the rare occasions when trade ties appeared to be threatened, leaders of business federations like Japan’s Keidanren (Japanese Business Federation) and South Korea’s Federation of Korean Industries (FKI) publicly lobbied for a return to cooperative relations.

The current round of tensions may involve some shifts in these dynamics. Companies in Japan targeted by South Korea’s Supreme Court ruling have a vested interest in supporting Abe’s hardline stance. Some South Korean business leaders reportedly also support President Moon’s plans to reduce economic dependence on Japan. But these moves will be costly and time consuming for the businesses involved.

Recent statements and polls suggest that the companies hardest hit by the export curbs in South Korea do not favor the prolongation of this dispute. For instance, FKI Vice Chairman Kwon Tae-shin recently warned in an “emergency” seminar on Japan’s export controls that retaliatory moves by the South Korean government could invite further costly reprisals from Tokyo, while boycotts of Japanese products and visit cancellations “will only exacerbate the conflict rather than resolving it.” And a recent poll conducted by The Chosun Ilbo, a conservative South Korean daily, indicated that a large majority of the country’s top twenty conglomerates favor a diplomatic solution and none support retaliatory actions like restricting Korean exports to Japan.

This suggests that President Moon will retain the support of powerful business interests if he takes further steps to ease tensions. In seeking a diplomatic solution to this crisis, he might find it helpful to open quiet, depoliticized channels to brainstorm business-led paths to de-escalation, along the lines of Samsung Electronics Vice Chairman Lee Jae-yong’s visit to Japan shortly after Tokyo announced the initial export controls.

Seoul and Tokyo should also publicly endorse the rescheduling of the Korea-Japan Business Conference, which was postponed in the spring due to bilateral tensions but is reportedly set to occur in September. With regular diplomatic channels not functioning well, this annual gathering of public and private economic officials is certain to take on greater significance than usual.

Lesson 3: Symbolic concessions can provide domestic nationalist constituencies with rationales for backing down.

In recent decades, symbolic concessions, like more “sincere” apologies for wartime misdeeds, have not fully resolved underlying historical issues. But they have helped to mollify grassroots nationalist pressure on leaders to maintain a hardline, thereby opening paths to de-escalation.

For instance, in October 1998, South Korean President Kim Dae-jung and Japanese Prime Minister Obuchi Keizo issued a joint declaration involving a symbolic trade—an apology from Japan for its colonial-era transgressions in exchange for praise from South Korea for Japan’s positive international contributions. These statements by Kim and Obuchi helped defuse what was at that time a protracted wave of tensions over the Dokdo/Takeshima islands and fishing negotiations, while facilitating higher levels of economic cooperation to weather the Asian financial crisis.

Symbolic concessions can also help smooth a path toward more cooperative dynamics in the present day. President Moon’s statement on August 15, known as “Liberation Day” in Korea because it marks the end of Japan’s colonization of the Peninsula, helped to set a new tone at the leadership level. Rather than repeating his battle-ready rhetoric of recent weeks, Moon extended an olive branch, stating: “Better late than never: if Japan chooses the path of dialogue and cooperation, we will gladly join hands. We will strive with Japan to create an East Asia that engages in fair trade and cooperation.” He even went so far as to promote the 2020 Tokyo Summer Olympics, noting, “I look forward to seeing the Tokyo Olympics become a source of hope for friendship and cooperation.”

Through this move, Moon signaled Seoul’s willingness to start a fresh chapter with Tokyo. By doing so, he left nationalist actors in Japan with less fodder to push for further hardline moves. The ball is now in Tokyo’s court to reciprocate the warmth or risk looking like the more unreasonable actor on the world stage.