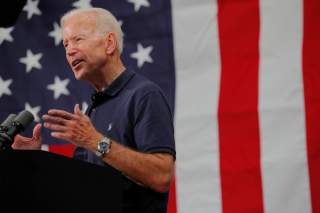 CNN’s Chris Cuomo had a direct question for Joe Biden, the 2020 Democratic presidential frontrunner: as president, would you continue to talk with the North Koreans as President Trump has done? Or would you cut off the dialogue and go another way?

Biden, who professes to know more about U.S. foreign policy than any of his Democratic competitors, had a ready answer. If Kim Jong-un wants to talk with the United States, then he should first demonstrate that he is serious about denuclearizing his country. “Look, you want to talk, you want to deal with us, you want sanctions lifted, show me something ahead of time,” the former vice president said in the July 5 interview. “Show me.”

For a split second, you can be forgiven for thinking Joe Biden turned into John Bolton overnight. But Biden’s tough response is actually a continuation of the Obama administration’s “strategic patience” policy, which was centered on upgrading the U.S.-South Korea and U.S.-Japan alliance, sanctioning the North Korean economy, and waiting patiently until the Kim regime saw the light and decided to denuclearize. In a way, Obama and Biden’s strategic patience policy on North Korea operated on a similar wavelength as President Trump’s maximum pressure policy on Iran. Remove the Trumpian military brinkmanship and rants on Twitter and the two look virtually indistinguishable from one another.

Obama, of course, was a man who was burned by the North Koreans before. In February 2012, Washington and Pyongyang agreed on a simple transaction: the North would suspend nuclear and ballistic missile launches and shut down its nuclear research complex at Yongbyon while America would deliver heavy fuel oil to mitigate Pyongyang’s energy needs. The arrangement was pragmatic at the core, a big interim step meant to create a degree of trust and accountability on the road to a more comprehensive nuclear disarmament deal. The Obama administration applauded it at the time as a potential breakthrough which eluded previous presidents. It turned out to be anything but; over a month later, Kim ordered a satellite launch and Washington withdrew from the deal, citing the satellite exercise as a violation.

The next four and a half years were a waste. Having been humiliated by a new North Korean leader very few people at the time understood, Obama took a cold-shoulder to diplomacy and prefaced any other dialogue with concrete commitments from the North. The United States began flying long-range B-1B bombers close to the North-South border in a signal to the North Koreans that Washington wasn’t joking when it said its alliance with Seoul was “ironclad.” Asked if his administration was open to additional diplomacy, Obama said “yes, but.” And the “but” was pretty big: “What’s important here is that you need to have this genuine willingness, on the part of North Korea, that they will give up nuclear capabilities,” Obama said during a 2015 joint press conference with then South Korean president Park Geun-hye. In layman’s terms: America would only going to give Kim the light of day if he gave something up in advance.

The policy was a non-starter for the North Koreans, and the Obama White House knew it. The result: nearly five wasted years, in between which Kim conducted three nuclear tests and dozens of missile launches.

Say what you will with Trump’s approach on North Korea. His buddy-buddy feelings towards Kim get many people upset. This is a man who, after all, runs the world’s most extreme personality cult. There are also legitimate gripes with the Trump administration’s internal dysfunction on this issue. After all, many times, we aren’t sure who holds the lead on the North Korea file, giving Kim reason to doubt whether Trump is being undermined by his more hawkish advisers. Denuclearization is no closer than it was over a year ago—no surprise, of course, given the U.S. intelligence community’s assessment that Kim almost certainly wont abandon all of his nuclear weapons.

But going back to strategic patience surely isn’t the answer either. A President Biden would evidently treat diplomacy as if it were a reward rather than a tool to solve problems between nation-states. As the primary campaign drags into the fall months, the vice president will need a far better explanation for his North Korea policy. Platitudes and sound bites won’t be enough.