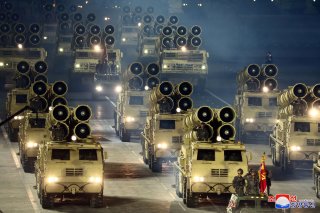 North Korean missile tests have a familiar, almost cyclical, pattern to them. If Pyongyang launches a projectile toward the East Sea, then Washington, Seoul, and Tokyo immediately condemn the action as a violation of UN Security Council Resolutions and a dangerous provocation threatening regional peace. The pattern occurred yet again last night when the North sent two ballistic missiles into the air days after its previous test of short-range cruise missiles over the weekend. The South Korean government called an emergency session of the National Security Council, as it always does. Japan, which has a government that is far more hardline toward the North than its South Korean neighbor, reacted with a mix of alarm and indignation. The launch “threatens the peace and security of our nation and the region and violates U.N. resolutions,” Japanese prime minister Yoshihide Suga said. “We are determined to protect our citizens’ lives and peaceful livelihoods at all cost, and will work closely with other countries including the U.S. and South Korea.”

While analysts on social media were giving the usual explanations about what North Korea may be up to—perhaps Kim Jong-un is trying to gain additional leverage over the United States before nuclear negotiations resume? Perhaps Kim is sending a message to the Biden administration that Washington’s maximalist demands need to change. Business in the North was churning along as it always has.

Those of us in the United States tend to jump to the conclusion that North Korean actions in the military realm are directly intertwined with Washington’s own. If the United States caused Pyongyang to lash out with a new volley of missiles, then surely Washington has the capability to convince the Kim dynasty to refrain from launching more?

The problem, unfortunately, is that there are some things even the United States—the preeminent power in the world—can’t control. North Korea may be a perpetually weak and struggling state with a GDP a fraction of Jeff Bezos’ net worth, but it’s also a state with a tremendous amount of pride governed by a leadership that takes paranoia to a new level. The North Koreans won’t be dictated to. When the North sets a plan for itself, it’s willing to implement that plan until Kim Jong-un is fully satisfied.

Could the latest North Korean missile test throw one more obstacle in the way of resuming diplomacy over Pyongyang’s nuclear program? While it’s certainly possible, it’s not like the North Koreans are particularly interested in going down the diplomatic route at the moment. Using various channels at its disposal, the Biden administration attempted to establish contact with the North in the hope the gesture would be reciprocated. Instead, like someone ducking robocalls, the North didn’t even bother to pick up the phone. In Washington, the lack of a response came as a disappointment. In Pyongyang, however, it doesn’t make much sense to talk when the White House is still conducting its North Korea policy review. And let’s face it: with Secretary of State Antony Blinken’s repeated references to the “denuclearization of North Korea,” Pyongyang isn’t hearing anything new today that they haven’t heard over the last fifteen to twenty years.

The missile tests that have occurred over the last week are less about delivering a stern message to the United States or “challenging” the new administration in Washington than they are about implementing a plan Kim Jong-un telegraphed earlier in the year. That plan, established at the Eighth Workers Party Congress in January, entails redoubling military modernization efforts and developing the full-spectrum of missile technology, from hypersonic glide vehicles to submarine-launched, solid-fueled intercontinental ballistic missiles. “Our external political activities must focus on controlling and subjugating the United States, our archenemy and the biggest stumbling block to the development of our revolution,” Kim told the party congress at the time. “No matter who takes power in the United States, its true nature and its policy toward our country will never change.”

To put it in the most basic terms, North Korea will continue to behave like North Korea. We have long passed the stage of being surprised.

Dan DePetris is a Fellow at Defense Priorities as well as a columnist for the Washington Examiner and The American Conservative. You can follow him on Twitter at @DanDePetris.