How Should President Trump Respond To North Korea's 'Christmas Gift'? 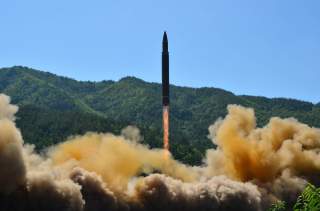 Merry Christmas! Kim Jong-Un, the maximal leader of an atheist regime, has promised to deliver a “Christmas gift” to Americans. Even better, the Trump administration gets to choose the Yuletide present it receives from the Brilliant Comrade. “What is left to be done now is the U.S. option and it is entirely up to the U.S. what Christmas gift it will select to get,” proclaimed North Korea’s vice foreign minister for American affairs according to state news agency KCNA.

According to Korea-watchers, two gift options are on offer: new talks aimed at settling the feud over Pyongyang’s nuclear-weapons program, or a test of an intercontinental ballistic missile (ICBM). Great Britain’s Prime Minister Winston Churchill once warned that “it is better to jaw-jaw than to war-war,” and that’s true as a general rule. But suppose, as appears probable, President Donald Trump and his advisers decide enough jaw-jawing is enough after a quarter-century of nuclear negotiations spanning four presidencies.

Suppose they rebuff Pyongyang’s demand for talks, deeming it a waste of time.

What can they get Kim for this Christmas gift exchange? We could run through a laundry list of diplomatic and strategic options open to Washington—from ignoring Pyongyang to incinerating it with fire and fury such as the world has never beheld. Rather than indulge in listmania, though, let’s inspect the atomic impasse through the eyes of the masters of strategy and see what sorts of options a back-to-basics look might reveal.

Start with the Western sage Carl von Clausewitz. The Prussian master was chiefly interested in the “war proper,” when the clangor of arms echoes across battlefields. Nevertheless, he explains how to size up an antagonist before the first shots ring out. Two concepts pertain. One, a combatant should try to discern the foe’s “center of gravity,” which Clausewitz portrays mystically as “the hub of all power and movement, on which everything depends.”

What is the North Korean center of gravity, and how can the United States get at it in peacetime, delivering a riposte after an ICBM test? Some candidates for the center of gravity: Kim Jong-Un himself, the nexus of the ruling regime; the security services, which seal off the country and insulate the populace from public information and diplomacy from the outside world; or the North Korean armed forces, which help enforce the totalitarian order at home while furnishing Pyongyang its only real implement for shaping affairs abroad.

None of these appears especially susceptible to the usual tools of peacetime deterrence or coercion, such as economic sanctions levied by the UN Security Council or individual governments. Clausewitz counsels commanders and their political masters to essay some guesswork when probing for enemy weaknesses. Senior leaders, he says, must “guess, so to speak.” They must “guess whether the first shock of battle will steel the enemy’s resolve and stiffen his resistance, or whether, like a Bologna flask, it will shatter as soon as its surface is scratched.”

In other words, the leadership must guess whether the adversary is sturdy or frail. Clausewitz’s metaphor for a hostile society, the bologna flask, is a gimmick. It’s a glass vessel used in magic tricks and physics experiments. Such a bottle is tough to the point of unbreakability on the outside yet absurdly fragile on the inside—meaning it can withstand a pounding from without but shatters at the slightest blow from within. It would be nice to think that’s an apt metaphor for North Korean society—that Kim’s rule is so delicate it will fly apart if outsiders could disrupt the relationship among the people, their rulers, and the armed forces through sanctions or other measures.

Trouble is, that approach has been tried time and time again without result. The Kim regime is resilient. It has defied prophecies of impending collapse for years if not decades. The populace appears numb to economic privation and government propaganda. History, in short, suggests the bologna-flask metaphor is an ill fit. Nor, in Clausewitzian terms, does Pyongyang appear likely to “collapse with exhaustion” under U.S. or allied pressure. It’s just as prone to react like a “wounded bull,” flailing about with unpredictable impact on North Korea’s neighbors and their alliances.

Indeed, threatening to run wild is the chief weapon in Pyongyang’s diplomatic panoply.

That gloomy diagnosis suggests that, short of actually using armed force, the Trump administration’s list of potential Christmas gifts for Kim Jong-Un is short and underwhelming. On the diplomatic and legal fronts, the administration can orchestrate statements of common purpose with regional allies such as South Korea and Japan, take its anti-missile case to the Security Council, plug any loopholes in the Missile Technology Control Regime or other export-control arrangements, or shore up the existing quarantine on North Korean imports and exports. It can tighten an already tight cordon still further.

On the military side Washington can try to show that American and allied missile defenses could take down a North Korean ICBM launch, or launch a devastating counterattack using conventional or atomic firepower should the order be given. In short, the Pentagon and White House can enlist time-tested methods of deterrence to dissuade the Kim regime from rash actions. They can make sure their physical capacity is up to the task of retaliation while convincing Pyongyang they have the willpower to deploy that capability to make good on their deterrent threats.

They can leave no doubt.

Or as strategist Edward Luttwak might put it, the United States and its allies can harness military capability and political resolve to cast a “shadow” across strategic deliberations in North Korea, biasing decision-making against aggression. But—unlike Christmas-morning gift-giving around the tree—shadows seldom yield immediate, tangible, or unequivocal results.

Such are the glum tidings from Santa Clausewitz.