I Live in South Korea. Here Is What a 'Limited' Reopening from Coronavirus Looks Like. 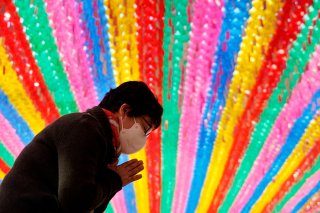 South Korea, where I call home, has been widely praised for its handling of the coronavirus. As a democracy, it labors under constraints a dictatorship like China, for example, does not. South Korea nevertheless managed to beat down the virus’ spread to under ten new cases a day this week, and without the kind of social revolt brewing in the United States now.

As everywhere else, there is pressure to re-open. Everyone is bored and frustrated at home. Businesses are struggling. Families are frazzled at having the kids at home all day every day. People are putting on weight because they are watching too much TV and over-eating. All the same sort of complaints accumulating on social media in Western countries exist here too. It’s exhausting.

Indeed, ‘corona fatigue’ set in earlier here. Korea’s clampdown began in mid-March, and one can already see the edges fraying. I see fewer masks on the subways. The lines to pick up government-distributed masks are shorter. Bars and restaurants are filling, where people are sitting in proximity and not wearing masks. Panic buying has stopped (although to be fair, there was never really much). The economic costs of the lockdown are now discussed more frequently on TV (although not nearly as vociferously as on Trumpist media in the U.S.).

All this – the apparent success of the anti-virus campaign, the spiraling economic costs, the social unhappiness at being locked indoors all day – has brought the government to experiment with some loosening. Religious buildings have reopened, although the government has insisted on strict distancing which will likely be hard for the Christian churches particularly given their design. Schools have also been given leeway to reopen, although the implementation of that varies widely. For example, my son’s kindergarten has re-opened almost completely; my daughter’s elementary school is closed completely, and my university is open for staff and required exams. Food establishments seem to be pushing the hardest. Restaurants and bars particularly seem to be operating in a pre-corona fashion, probably as much out of desperation for business as the belief that the worst has passed.

It is important for Western readers hoping for a return to normalcy not to overrate these moves. South Korea is indeed a useful canary in the coal mine for other democracies in this struggle. It too is a democracy whose anti-viral moves constrained by civil liberties; it has handled the virus very well, and it has struggled with it longer than the West. So it is further along than many other countries and is certainly a better model than non-democracies like Singapore.

But South Korea’s corona ‘re-opening’ is still quite limited. The South Korean government, for example, does not even use such language, as that suggests a far greater return to pre-corona times than it is permitting. There were also warnings almost immediately from South Korean health officials that any re-opening would permit a resurgence of the virus. The Korean CDC is talking about a lock-down of varying intensity for a year – with re-clamp-downs possible if clusters pop up - until a vaccine is found.

This is very different from the American discourse, particularly on the Trumpist right where sympathetic media such as Fox News are hinting that normality could return within a month or less. Republican governors are now even admitting that their states could see a spike of fatalities as they re-open. The U.S. conservative debate is now increasingly blunt that the economic costs, and the consequent human costs, of the lock-down, are exceeding the direct human costs of the virus.

There is nothing like this in South Korea. The response here is far more technocratic. The South Korean president does not give daily briefings. He has given a few pep talks now and then, but nothing with the level of politics and sensationalism characteristic of the U.S. President Donald Trump’s daily briefings. Instead, the prime minister speaks a few times a week in a fairly bland tone. But mostly scientists and bureaucrats, such as the head of the KCDC, have been the public face of the South Korean government regarding corona.

Nor has the government contradicted the epidemiologists or sought to dispute their expertise or suggestions. No politician is arguing that the lock-down should be relieved for political reasons, and in the legislative election last week, a re-opening of the economy was not an issue. The South Korean public seems resigned to a fairly long slog and a re-opening in very small steps.

There will be much future discussion about why the stark contrast in the U.S. and South Korean responses, given the plaudits South Korean has received. Some of it will inevitably redound on Trump himself. Trump is up for re-election, and he is itching, for fairly obvious reasons, to restart the economy. An economy racked by plague, contraction, and unemployment will likely cost him the election.

But there is another issue too – cultural memory. South Koreans have been through these sorts of lockdowns before – for SARS and MERS. There is a reservoir of collective patience that does not exist in the West which has not seen something like this since the Spanish Flu of 1918. Trump is not just channeling his own desire to ‘re-open’ but that of a large chunk of the American population in disbelief that the world changed so rapidly.