It Would Cost Trillions: The Day North Korea Collapses 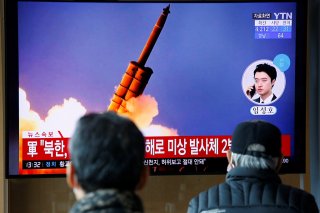 The prospect of a peaceful Korean Unification, however remote it seems, would be a historical event worth planning for. While preparing for the worst, we should hope for the best. Hoping for the best means there is a scenario where North Korea’s collapse and regime change occur miraculously, opening doors to South Korea and the West to take over North Korea in what one hopes would be a peaceful absorption. As unlikely as this sounds, it is important to remember that it is not without historical precedent.

In November 1989, West and East Berliners flocked to what was one of the most heavily guarded borders in the world and tore down parts of the Berlin Wall that had divided Germany for twenty-eight years. With U.S.-led assistance, Germany became united through the incorporation of East German federal states to West Germany, and it embarked on a path to becoming one of the richest, most free, and most prosperous countries worldwide. The fall of the Berlin Wall was an event that no one saw coming.

In this unlikely scenario, South Korea, Japan, and the West would have to respond diligently and rapidly. Therefore, they need to start making plans concerning the cost of rebuilding North Korea if its regime collapses and South Korea steps in to join the two territories of the Korean Peninsula into a unitary state just as West Germany did. It goes without saying that the largest share of the burden in rebuilding efforts would fall on South Korea. The Asian Development Bank and the World Bank would also be on the hook for such an enormous and historic task. Is South Korea ready for this?

Estimates on how much reunification would cost South Korea range from 3 percent to 12 percent of its annual GDP over several decades. In 2015, the South Korean National Assembly estimated the unification cost between 2016 to 2060 to be $9.2 trillion—almost seven times South Korea’s annual GDP. South Korea’s Ministry of Unification, the main government body responsible for inter-Korean relations, received a total of $1 billion in its 2020 budget—a 10 percent increase from the previous year. Amongst infrastructure projects, the budget ramp-up focuses on boosting economic cooperation in efforts to achieve a ‘peace economy’ between the countries. The budget, however, falls short of the suggested estimated costs. Rebuilding North Korea’s transportation and energy sectors alone would require $63.1 billion.

Using the reunification of Germany as a proxy, the Eastern part to this day receives cash injections. The overall cost of German Unification amounts to a total of $2.25 trillion. The largest portion (65 percent) went to social benefits, whereas other heavy investments were made in infrastructure and in providing ‘welcome money’ to each East German. Despite the long-term economic adjustments, German unification is considered a success story as it allowed 16 million people to step into a country with higher standards of living, although differences between the West and the East still linger decades after the reunification. The former East falls behind the former West on important economic measures: employment, earnings, GDP per capita, and productivity.

The German experience demonstrates that reunification has a costly price tag and a longer time horizon. Differences between the Koreas are striking. In 2016, North Korea had a GDP per capita of $1,500 and South Korea had $27,608 in the same year. North Korea is one of the poorest countries in the world, whereas South Korea is the twelfth largest economy globally.

Famine, undernutrition, and lack of access to basic services are widespread problems in the North. Out of a population of 25 million, 41 percent are undernourished and 70 percent suffer from food insecurity. Health services are ill-equipped to respond to people’s basic health needs. Life expectancy in North Korea is sixty-eight years for males and seventy-six for females, whereas in the South it is eighty years for males and eighty-six for females.

There is great uncertainty about what Korean unification would look like, but one study by colleagues at CSIS looked at the economics of unification and concluded that it may not be as cumbersome as is typically imagined. In the short-run, unification would slow South Korea’s growth and the cost of unification would be steep. In the long-run, benefits would exceed costs and both sides would gain from economic integration, human capital exchange, and poverty reduction.

While the two Koreas differ extensively economically, politically, and socially from the two Germanies of 1989, it is important that the West takes into account that reunification efforts will easily require significant economic resources over time: rebuilding North Korea will be a project that will last more than thirty years.

Daniel F. Runde is Senior Vice President, Director of the Project on Prosperity and Development, and holds the William A. Schreyer Chair in Global Analysis at the Center for Strategic and International Studies (CSIS). He was an architect of the BUILD Act passed by Congress in 2018 , a bipartisan bill creating a new U.S. development agency: the U.S. International Development Finance Corporation (USIDFC). He is chairman of the Advisory Committee on Voluntary Foreign Aid (ACVFA), chair of the Sub-Saharan Africa Advisory Committee for the Export-Import Bank of the United States (EXIM), and serves on the boards of the International Foundation for Electoral Systems (IFES), the Millennium Challenge Corporation (MCC) Advisory Council, the Western NIS Enterprise Fund (WNISEF), and the Ashesi University Foundation (a private university located in Accra, Ghana). He previously held senior leadership roles at the International Finance Corporation (IFC), served as Director of the Office of Global Development Alliances (GDA) at the U.S. Agency for International Development (USAID). He is a lifetime member of the Council on Foreign Relations (CFR), a member of Bretton Woods, and is a holder of the Officer’s Cross in the Order of Isabel la Católica.