It's Time to Formally End the Korean War 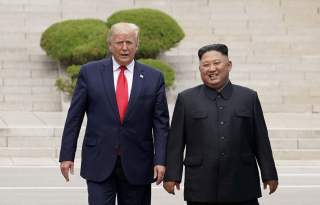 Last night, President Donald Trump did what no other sitting U.S. president has done—he stepped foot onto North Korean soil and greeted North Korean chairman Kim Jong-un. And in typical Trump fashion, he staged a second dramatic crossing over the military demarcation line at Panmunjom with Kim, stepping together onto South Korean soil and greeting South Korean President Moon Jae-in before having a fifty-minute meeting in the South’s Freedom House.

Leaving the DMZ, Trump said, “We moved mountains,” and that working-level talks led by U.S. special representative Stephen Biegun would get started right away. “The meeting was a very good one, very strong . . . We’re not looking for speed, we’re looking to get it right.”

To get it right, the first step the Trump administration should take is to offer North Korea a security guarantee, whether in the form of an end of war declaration or a non-aggression pact. It may have been, after all, what convinced Kim to meet Trump at Panmunjom.

One year ago, armed North and South Korean soldiers faced off. There were guard posts, landmines and speakers blasting propaganda across the DMZ. Today, the speakers and guard posts are down and many landmines were removed in the process of searching for the remains of U.S. soldiers who fell during the war. The fact that North Korean, South Korean and American security details could even stand side-by-side at Panmunjom is testament to the April 27, 2018 Panmunjom Summit where Moon and Kim announced to the world, “there will be no more war on the Korean Peninsula and thus a new era of peace has begun.” This agreement was the foundation for the Singapore Declaration, where Trump and Kim promised to establish new relations toward building a lasting peace and the denuclearization of the Korean Peninsula.

Unfortunately, much of that momentum was squandered by those within the Trump administration who insisted on the immediate, complete and unilateral nuclear disarmament of North Korea before improving relations (aka the Bolton Libya model). We know how that fared for Muammar el-Qaddafi. Fat chance that Kim will accept such conditions given that North Korea already survived U.S. bombing during the Korean War where 80 percent of its cities were destroyed.

Following Chinese president Xi Jinping’s first visit to Pyongyang last week in which he affirmed the two countries’ alliance, the Trump administration, recognizing the window to keep talks alive with Pyongyang was soon closing, swiftly moved to seize the window afforded by the eighth Trump-Moon Summit in South Korea following the G20 summit in Osaka.

On June 27, North Korea’s Korea Central News Agency released a statement by Kwon Jong Gun from the DPRK Foreign Ministry: “Even though we are to think of holding a dialogue with the U.S., we need first to see a proper approach towards the negotiation on the part of the U.S. Negotiation should be conducted with a counterpart who has a good sense of communication, and it could also be possible only when the U.S. comes up with a proper counterproposal.” (emphasis mine)

Days before Trump’s meeting with Kim, Biegun was on the ground meeting with both his South Korean counterpart Lee Do-Hoon and afterwards with North Korea’s Vice Foreign Minister Choe Son-hui. He reiterated the U.S. willingness to a “flexible approach.” The South Korean Foreign Ministry “reaffirmed that (the United States) is ready to hold constructive talks with the North to move the commitments of the June 12 Singapore Joint Declaration between President Trump and Chairman Kim Jong-un forward in a simultaneous and parallel manner.” In other words, a parallel process towards peace and denuclearization, step-by-step.

In addition to substantive movement on establishing trust between the Cold War enemies, Trump’s designation of Biegun to lead the working-level talks clearly met North Korea’s demand for “a counterpart who has a good sense of communication.”

Nearly seventy years of tensions and hostilities can only be resolved by building trust step-by-step, rather than insisting on an all-or-nothing deal at the front end of this peace process. A crucial part of building trust is resolving decades of hostilities—the root cause of the nuclear crisis—which can only be achieved by ending the Korean War and working toward a peace agreement.

So what good would such an end of war declaration do to advance denuclearization? According to Henri Feron, a legal scholar with the Center for International Policy: “While North Korea is unlikely to fully trust U.S. security guarantees, it will definitely see it as a positive signal worthy of reciprocation. On the other hand, for the U.S. to refuse to provide such guarantees will be interpreted in [North Korea] as clear evidence of continued hostility.” Furthermore, according to Moon Chung-in, President Moon’s senior advisor on North Korea, security assurances in the form of an end-of-war declaration or a nonaggression pact “doesn’t cost the U.S. any money.”

With Biegun in the driver’s seat, the Trump administration’s flexible approach to a parallel process towards peace and denuclearization, and Bolton out of the picture, we may in fact see substantive progress towards finally ending the Korean War.

Almost exactly five months ago on January 31, 2019, Biegun gave a groundbreaking speech at Stanford University outlining this pragmatic approach. “President Trump is ready to end this war,” he said. “It is over. It is done. We’re not going to invade North Korea. We are not seeking to topple the regime.”

Christine Ahn is the founder and executive director of Women Cross DMZ and the international coordinator of the global campaign Korea Peace Now! Women Mobilizing to End the Korean War.