Japan vs. South Korea: Can America Save the Day? 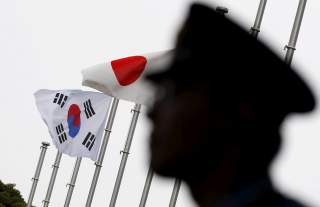 With Japan and South Korea’s $82 billion a year trade relationship rapidly deteriorating, the United States has remained adamant about preserving its neutrality and publicly ambivalent about what it is doing to prevent its two allies from undoing their careful bridge-building since normalizing relations in 1965.

Trump administration officials, preferring to avoid interjecting themselves into a sensitive dispute over painful historical differences, have instead focused their energies on the president's high-stakes trade standoff with China, halting diplomatic outreach to North Korea and efforts to secure favorable trade and burden-sharing terms with Seoul and Tokyo.

The administration’s minimalist approach, while possibly unavoidable at the moment, is damaging to U.S. interests in the region.

The consensus in Washington betrays a realistic assessment of the United States’ limited capacity to publicly influence relations between Japan and South Korea without getting in the way of other diplomatic ventures, such as the renegotiation of its alliance cost-sharing Special Measures Agreement with Seoul. Consequently, however, Washington’s cautious positioning may fall short of ever being able to fully lift the pall of mistrust which hangs between Tokyo and Seoul, thus interfering with long-term U.S. alliance-building projects in Asia.

Further still, the administration’s wavering response is leading to instability. North Korea, perhaps sensing weakness in the U.S. alliance network, resumed missile testing in July. On July 23, a Russian military plane (part of a joint Russia-China exercise) violated South Korean airspace over the Dokdo/Takeshima Islands, which are disputed by Japan, in an incident that analysts believe was intended to test the two countries. Also worryingly for the United States’ standing, China is moving forward with scheduled trilateral talks with Japan and South Korea in December, taking the initiative in mediating the trade dispute. With South Korea opting last month to withdraw from a key military intelligence-sharing pact with Japan days before its annual renewal, from a U.S. perspective bilateral relations have reached a new low.

Clearly, quelling tensions between Japan and South Korea is critical for the United States’ broader strategic objectives in the Indo-Pacific region. The question remains how.

Beyond encouraging Prime Minister Shinzo Abe and President Moon Jae-in to come together to settle their differences, the United States can be a proactive backroom facilitator in these negotiations, ensuring that the two governments remain on the same page for the long stretch, that political disruptors on both sides modulate their rhetoric, and that international stakeholders are empowered to arbitrate and provide legitimacy for a legally-binding—and truly irreversible—settlement.

Victor Cha at the Center for Strategic and International Studies proposes a similar measured intervention, with his recommendation for a new special envoy “who would call on Japan to engage with South Koreans and who would discourage Seoul from more public maximalist statements like ‘We will not lose to Japan again,’ which leaves no room for compromise.”

Let us examine the Trump administration's options, both immediate and long-term, for soothing the current trouble spots between Japan and South Korea. In addition to the ongoing trade dispute, these include the South Korean Supreme Court’s rulings last year ordering Japanese firms to compensate Koreans conscripted for wartime labor during Japan's colonial rule, as well as the Moon administration’s politically motivated decision in November to suspend a foundation established by his disgraced predecessor, Park Gyeun-hye, as part of a 2015 bilateral agreement on the related issue of wartime sexual slavery or ‘comfort women.’

The jointly-administered foundation would have distributed $9 million in compensation to surviving victims and their families, concluding a debate over the adequacy of Japan’s $800 million in grant and loan reparations to South Korea under the 1965 treaty. (Critics of Japan’s denials that it owes further reparations insist the South Korean government at the time—led, incidentally, by Park's father, Park Chung-hee—never compensated any actual victims of forced labor, instead earmarking the Japanese funds for industrial nation-building projects. Meanwhile, Japan maintains that South Korea should settle such mistakes internally.) Further confusing Seoul’s insistence that the issue be reexamined, it took until 2005 for a South Korean government to question the disbursement of Japanese reparations under the 1965 framework.

Given the complexity of these disagreements, the United States should push for third-party/international adjudication of the labor conscription and sexual slavery disputes. Global institutions like the International Court of Justice (ICJ) and the International Criminal Court (ICC) exist to defuse exactly these sorts of disputes between countries that purport to abide by international rules and norms. Yet, thus far, they have been sidelined despite both sides separately pushing for international arbitration. Even Toru Hashimoto, the outspoken former governor of Osaka, has recommended that the dispute over reparations be brought before the ICJ, which specializes in settling legal disputes between states.

As such, Tokyo should be allowed to take its case regarding South Korea’s contradictory pre- and post-2005 positions on Japanese reparations to the ICJ. In turn, Seoul should be allowed to submit individual claims by comfort women and other victims to the ICC, which has jurisdiction over crimes against humanity including sexual slavery, torture and imprisonment.

From a legal standpoint, there are questions regarding the ICC’s ability to adjudicate war crimes perpetrated before the court came into effect in 2002—the Rome Statute limits the court’s jurisdiction to crimes committed since. However, if the ICC’s powers are too limiting, the United States could leverage its authority at the United Nations Security Council to initiate a special mechanism for settling World War II-era claims against the Japanese government in a fair, responsible and permanent manner—as it did in 1994 with UNSC Resolution 955 establishing the International Criminal Tribunal for Rwanda.

The alternative is a destructive cycle of nationalist identity politics, anchored by differing historical interpretations, which Cha aptly sums up as inevitably leading to “one step forward/two [or as much as five] steps backward” diplomacy.

On trade, our recommendation is similar: that Seoul’s grievances regarding Japan’s export restrictions on chemical inputs for South Korean semiconductors and the removal of South Korea from its ‘whitelist’ of preferred trading partners should be fast-tracked through the World Trade Organization (WTO)’s Dispute Settlement Body. The current escalatory trade environment can only lead to wanton economic harm and bottlenecks in bilateral industry ties, as Japanese exporters of high-technology and other ‘strategic’ goods are forced to undergo extra screening to ensure they do not benefit the South Korean military or weapons industry.

Finally, as both a short- and long-term policy, the United States should work with elected officials in Tokyo and Seoul to undertake a broader public diplomacy campaign that directly engages respected, level-headed Japanese and South Koreans who can build political headwind in their respective countries either for a temporary suspension of trade hostilities in the near-term, or for a more permanent grassroots resolution of historical differences over subsequent years. South Africa’s Truth and Reconciliation Commission, established in 1996 to address the legacy of apartheid, may offer a useful template for fostering meaningful discussions between Japanese and South Koreans.

As a first step to addressing the immediate situation, the United States—if not the Trump administration, then various nongovernment stakeholders—could convene a meeting of key opinion leaders from all three countries to submit a joint statement to Tokyo and Seoul pleading for a diplomatic solution.

Elliot Silverberg has worked in strategic advisory, political risk consulting, journalism, the legal field and think tanks in the U.S. and Japan. Andrew Injoo Park is president of the Sejong Society in Washington, DC, and a nonresident James A. Kelly fellow at the Pacific Forum.