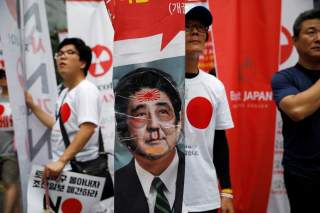 Japan and South Korea are locked in yet another diplomatic conflict. Japan has threatened to remove South Korea from an export “whitelist” regarding specialty chemicals for hi-tech products. South Korean firms wishing to import these chemicals from Japanese suppliers would now need to apply on a case-by-case basis for purchases. This would threaten South Korean supply chains, provoke delays, and add new transaction costs.

Japan claims that these export controls are due to South Korea sanctions leaks regarding North Korea. This is transparently false. As so often, the real issue is outstanding South Korean concerns about Japanese imperial behavior in Korea in the first half of the last century. Japan absorbed Korea in 1910 as a part of its larger Asian imperialist drive. Japanese behavior was harsh, and postwar Japanese governments have struggled to apologize or even admit the army’s behavior on the Korean Peninsula. Simultaneously, South Korean nationalism has increasingly taken a distinctively anti-Japanese hue. North Korea curries some sympathy in South Korea, especially on the political left, so it makes for an uncomfortable narrative villain in South Korean historiography. Japan fills that role instead, especially in South Korean film.

Japan claims that the South Korea-Japan normalization treaty of the 1965 resolved all imperial-era topics. South Korea claims that new issues have since arisen. Most recently, South Korean courts have permitted war-time forced labor claims against Japanese firms to proceed. Asset confiscation has been threatened. Most observers read Japan’s whitelist threat as a pushback on the labor compensation claim.

The upshot is deep alienation between liberal democratic U.S. allies whom one might otherwise expect to work together. South Korea claims the moral position; Japan claims the legal ground. Resolution seems interminably out of reach, and tensions flare up with some regularity. But this time there appears to be different for two major reasons, both of which portend a longer, more divisive fight than usual:

1. Japan is pushing back far harder than ever before

This time though, Japanese prime minister Shinzo Abe has clearly had enough of these periodic outbursts of tension and is trying to force a resolution. Japan is pushing back far harder than ever before. Never before has Japan threatened something akin to sanctions against South Korea Never before has it endorsed what analysts are now calling a trade war. Given the boutique specificity of the whitelist targets, it is very clear now that the Abe government has put a lot of thought into this. It clearly looked for very specific points of leverage against the South Korean economy.

2. The Americans are scarcely involved.

The other big difference this time is U.S. disinterest. In previous disputes, the United States played a mediator role. The United States has an obvious strategic interest in both partners focusing on North Korea and China, rather than each other. It was also politically easier for both sides to make thirty-party concessions to the United States than to each other in a zero-sum conflict. In the past, President Barack Obama had to step in to ensure that the two countries remained on good terms.

In contrast, the Trump administration just does not seem to care much—a reaction that may stem from Trump himself. Trump clearly has little interest in alliance management. He frequently sees U.S. allies as security free-riders rather than partners and has said as much about both South Korea and Japan in the past.

It is also possible that some of the U.S. stand-offishness is just exhaustion with this issue. In fact, it is particularly noticeable how little Track II U.S. commentary there has been on this spat. Korea and Japan Twitter in English have been noticeably quiet. Previous tensions have provoked all sorts of articles, think-tank reports, and even books on the subject; this time, however, the U.S. analyst community, along with the U.S. government, is simply not saying much. Perhaps the time has come for the United States to step aside and let these two scorpions in a bottle thrash it out.

It would be a shame if this led to a major breach, but it is just as likely that U.S. intervention acts as a “moral hazard’ buffer and allows the worst nationalist maximalist of both countries to steer the debate. After all, the United States ensures all players against the worst consequences of their worst rhetoric. Perhaps the withdrawal of U.S. insurance will finally incentivize compromise all around? We will likely learn the answer to that in the next six to twelve months.