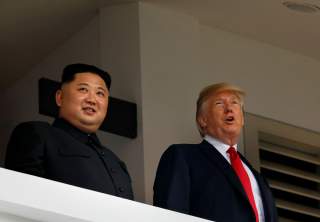 The bottom line is, Kim Jong Un will not give up his nuclear weapons in 2019, or any time soon. He may make small concessions, or—more likely—gratuitous concessions, to create a perception that he is playing ball with the United States. But I strongly believe that he will not commit to, nor implement, complete, verifiable, irreversible, denuclearization (CVID) in 2019.

Nuclear weapons are not only a security guarantee for this regime but are also a source of national pride for Kim Jong Un and North Korean citizens. This tiny nation has been able to stave off foreign intervention from the world’s most powerful countries, largely because of its nuclear weapons—or so their national narrative goes.

While not admitting to defeat, North Korea watchers and policymakers in the United States must conduct analysis and craft policies on North Korea based on the unfortunate reality that North Korea will most likely not denuclearize anytime soon. We must operate in the world as it is, not as it should be.

As a private citizen, I predict that the Trump administration may not focus on the North Korean denuclearization issue in the coming year. This is because CVID demands significant political energy and resources without guarantees that these efforts will pay off for the United States or our allies. Furthermore, given that we are heading into the 2020 elections, Trump’s administration may focus on lower hanging foreign policy fruits than this decades-long obstinate issue.

The love between President Trump and Kim seems to have cooled in the past few months. If all love is lost, President Moon will have the very difficult job of maintaining and balancing U.S.-South Korean and inter-Korean relations.

But no matter how intertwined and heated relations centered on North Korea become in 2019,  I do not believe there is a chance of a second Korean War. The human and economic costs for a conflict on the Korean peninsula will clearly override any geopolitical benefit that may result from such a conflict. All actors recognize this, and not going to war is resoundingly the most rational choice recognized by America, South Korea and North Korea.

Jieun Baek is the author of North Korea’s Hidden Revolution: How the Information Underground is Transforming a Closed Society (Yale University Press, 2016). She is currently a Ph.D. candidate in Public Policy at the University of Oxford.