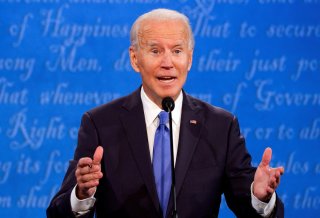 The final presidential debate of the 2020 presidential election, which took place Thursday night between President Donald Trump and former Vice President Joseph Biden, was originally scheduled to focus on foreign policy. However, the cancellation of the second debate altered the planned topic list to focus more on domestic topics, which led to a complaining press release from the Trump campaign in the days before the debate.

There were some brief moments, however, in the final debate that touched on foreign policy, including one that dealt with North Korea policy. In that exchange, President Trump touted his diplomatic opening to North Korea, while former Vice President Biden denounced Kim Jong-un as a "thug."

About halfway through the debate, moderator Kristen Welker asked a question about North Korea, and the topic was discussed for just over two minutes.

"President Trump, you've met with North Korean leader Kim Jung-un three times. You've talked about your beautiful letters with him. You've touted the fact that that there hasn't been a war or a long-range missile test," Welker said, per a transcript posted to Twitter by Voice of America Seoul bureau chief William Gallo. "And yet North Korea recently rolled out its biggest-ever intercontinental ballistic missile and continues to develop its nuclear arsenal. Do you see that as a betrayal of the relationship?"

Trump answered no. He went on to say that when he met with former President Obama, two days after his election in 2016, and Obama told him that "the biggest problem we have is North Korea." He also claimed that Obama indicated that "we will be at war with North Korea. Guess what, it would be a nuclear war. And he does have plenty of nuclear capability."

The former vice president went on to reply that the North Korea policy of a Biden Administration would entail China being "part of the deal," because "North Korea is a problem… we're going to make sure we can control them and make sure they cannot hurt us. And so if you want do something about it steep up and help. If not, it's going to continue."

Biden went on to criticize the president for his handling of the North Korea issue.

"What has [Trump] done? He legitimized North Korea. He's talked about his good buddy who's a thug. A thug. And he talks about how we're better off. And they have much more capable missiles, able to reach U.S. territory much more easily than [they] ever did before."

In response to a follow-up question from Welker about whether he would meet with Kim, Biden stated that, as president, he would only agree to such a meeting "on the condition that he would agree that he would be drawing down his nuclear capacity," and committed to the denuclearization of the Korean peninsula.

Trump went on to state that Kim refused to meet with the previous administration since Kim "didn't like Obama." Trump added that the U.S. and North Korea now "have a good relationship."

As Welker attempted to get on to the next question, Biden struck back.

"That's like saying we had a good relationship with Hitler before he in fact invaded Europe. Come on." He added that the reason Kim refused to meet with Obama was that Obama both insisted on denuclearization, and because "we're not going to legitimize" the North Korean regime.

Trump got the last word, saying of the Obama Administration that "North Korea was a mess… they left us a mess and Obama would be, I think, the firsts to say, it was the single biggest problem he thought that our country…"

Among the reactions on Twitter to exchange was that of historian Kevin Kruse.

"'The murderous dictator in charge of North Korea likes me more than Obama and Biden' is an interesting argument," Kruse wrote.

Video of the exchange can be seen here.