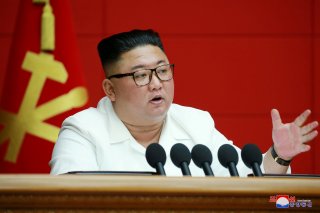 South Korean president Moon Jae-In has renewed his call to formally end the Korean War—and as North Korea demands a high price for doing so. These are the two fundamental truths about North Korea the Biden administration must keep in mind. First, Kim Jong-un has no intention of giving up his nuclear weapons, no matter how many incentives America offers him. Second, the United States will deter Pyongyang indefinitely regardless of what Kim does or doesn’t do.

The overriding objectives of Washington’s foreign and military policy regarding North Korea must be to prevent unnecessary war and to maximize America’s ability to prosper in the Indo-Pacific region. The United States can work toward the distant goal of a nuclear-free Korean Peninsula is a good and worthy target, but it is not a prerequisite for the United States to fully realize those two paramount objectives. Closely cooperating with our South Korean ally and engaging diplomatically with North Korea can help facilitate both.

Possibly the single greatest roadblock to minimizing the threat of war that has afflicted virtually every U.S. administration since 2006, which is when Pyongyang successfully conducted its first test of a nuclear warhead is the dogmatic insistence that North Korea must completely denuclearize before the United States takes any action.

Refusing to engage with Pyongyang until it denuclearizes guarantees that Kim will not only continue to keep his nuclear weapons. Also, this feeds his fears and is the reason why North Korea developed nukes in the first place. Kim believes having a credible nuclear deterrent is necessary to prevent the United States from attacking or invading his country. Regime survival is Kim’s top objective; therefore, it is highly unlikely he would ever attack the United States with a nuclear strike because he knows doing so would result in a withering nuclear retaliation that would annihilate his regime.

It is therefore the Biden administration’s responsibility to pursue policies and actions which strengthen the principal objectives of avoiding unnecessary war and maximizing economic opportunity. The first goal can be secure by the maintenance of a strong, well-trained, and modern U.S. military, including both conventional and nuclear forces. That is something that already exists.

America’s ability to enhance economic opportunity in the region can best be safeguarded by its leaders acknowledging its significant military advantages over Pyongyang and engaging in tough but realistic diplomacy. There are various ways Biden could advance U.S. interests in the diplomatic sphere.

First, Biden should leverage the expertise and incentive of Moon and support some of his key initiatives. There is no one who has more at risk in the event of war with the North than Moon. In his UN speech in September, Moon reiterated his call to craft an end-of-war declaration with North Korea to “make irreversible progress in denuclearization and usher in an era of complete peace.”

Moon pragmatically said the objective was to make “progress” towards denuclearization, not to “achieve” it. An end-of-war declaration is not the same as a peace treaty and would provide little beyond symbolism, but Moon believes that even symbolically ending the war will open additional opportunities to further lower tensions and connect the two Koreas culturally and economically. Lowering tensions on the peninsula and advancing peace are in America’s interests.

Second, Biden could take the initiative to engage in direct talks between Washington and Pyongyang. Former President Donald Trump engaged in such talks beginning in 2018 and made initial progress in greatly lowering the tensions between the two countries. Unfortunately, he listened to the hawkish advice of his then-National Security Advisor John Bolton at a summit in Hanoi in 2019 and all progress was irrevocably lost for the remainder of Trump’s term in office. Biden has a chance to correct those errors.

In September, North Korean officials publicly acknowledged that they were open to discussions with the Biden administration. Pyongyang is no doubt motivated to have talks with the intent of winning sanctions relief. Many in Washington reflexively dismiss such a possibility but that is a mistake.

The value of sanctions is not in their imposition but in their success at moderating behavior in the target country—and only with the potential of having sanctions lifted will the adversary change conduct. Biden would be wise to explore the potential for targeted, limited sanctions relief in exchange for getting Pyongyang to take actions that benefit the security of the United States and South Korean (like nuclear freezes and verifiably rolling back on critical nuclear infrastructure, as examples).

The Biden administration would remain in a position of strength over North Korea in any negotiations because it could walk away any time Pyongyang makes unreasonable demands. It doesn’t need a deal to keep the country safe and U.S. economic opportunities preserved. It only has to avoid an unnecessary war.

Kim knows better than anyone that his conventional and nuclear forces can at best deter invasion but are woefully inadequate to even contemplate an unprovoked, offensive attack against either the United States or South Korea. Kim isn’t going to give up his only deterrent against U.S. attack any time soon, but he will remain deterred indefinitely. It makes sense for Biden and Moon to exploit this advantageous position to seek diplomatic engagement.

Daniel L. Davis is a senior fellow for Defense Priorities and a former lieutenant colonel in the U.S. Army who deployed into combat zones four times. He is the author of The Eleventh Hour in 2020 America. Follow him at @DanielLDavis1.