Joe Biden Would Strengthen the U.S.-South Korea Alliance, But Is That Best For America? 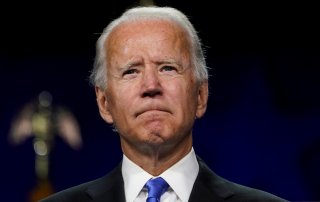 In some key respects, the U.S. strategy has been successful. Deterrence has occasionally wobbled; at times North Korea used violence against the South, and Washington itself contemplated preventive strikes. Yet so far both Pyongyang and Washington have backed away from war. Diplomacy, too, has had some successes. Although American officials have not succeeded in talking Pyongyang into giving up its arsenal, diplomacy at times has led to testing moratoriums, ratcheted down tensions, and delayed North Korea’s technological progress.

A Biden administration—given Biden’s experience with the Obama policy of “strategic patience”—would likely adopt its own version of this policy of deterrence and diplomacy. A Biden policy would feel a lot different from the Trump administration approach; Trump came in with “fire and fury”—elevating the risk of war on the peninsula—and then veered to conciliation via summit diplomacy. Biden, however, would likely steer clear of both extremes of threat and conciliation. Given Biden’s temperament, experience, foreign policy team, and most importantly, because his energies will be focused elsewhere (on managing one of the worst domestic crises in American history), changes to U.S. North Korea policy will likely be evolutionary, not revolutionary.

This may be a mistake. Continuity in U.S. policy toward the Korean peninsula is remarkable given dramatic changes in East Asia, America’s strategic position, and North Korean nuclear capabilities.

Pyongyang has made significant progress in developing long-range delivery systems that could reach the United States. North Korea’s long-range nuclear capabilities are still maturing, but the threat they pose to American cities if war erupts demands that the United States re-evaluate whether an alliance with South Korea continues to advance U.S. interests. The American people deserve to hear from their leaders and from the U.S. foreign policy elite why an alliance that puts American cities in North Korea’s crosshairs is worth the horrific risks.

It’s likely that Pyongyang developed its intercontinental ballistic missile capabilities in great part to weaken the U.S.-ROK alliance. So ending that alliance would be giving North Korea, at least in this domain, exactly what it wants. It’s possible, too, that although Beijing publicly opposes North Korea’s nuclear program, China hoped it would create a wedge between Seoul and Washington. Reevaluating an alliance with a valued partner, to the delight of one’s adversaries, would be a bitter pill indeed.

That said, the facts are what they are. North Korea has, or is on the threshold of attaining, the ability to destroy several American cities. In the event of war—which could break out any time—Pyongyang would have sound strategic reasons to use nuclear weapons. Americans thus need to debate, do the stakes on the Korean peninsula, or the value of an alliance with South Korea, justify risking the survival of the United States? America ran that terrible risk to protect Europe during the Cold War. It’s not clear that running that risk to protect South Korea makes sense today.

Americans may decide that maintaining an alliance and nuclear umbrella with South Korea still makes sense. After all, South Korea is a wealthy, thriving, and creative nation, a valued friend and democratic partner, and a militarily capable ally. And perhaps South Korea—seeking to make itself a more valuable ally—will step up: join (expand) the “Quad,” cooperate with Japan, and thereby partner in the U.S-led effort to manage China’s rise. The American people may thus decide that the partnership with Seoul is so valuable that it justifies accepting real risks of nuclear war. But the current in-between position—that Seoul is not with the United States in its critical regional mission vis-à-vis China, but expects the United States to risk its survival on South Korea’s behalf—would be (and should be) a tough sell to the American people.

Biden has castigated the Trump administration for weakening U.S. alliances and has declared his administration would recommit to those relationships. “I’m going to let South Korea and Japan know we’re there for them,” he said. “We are their nuclear umbrella. We’re there for them.” This doesn’t sound like a leader who plans to preside over a major reorientation of American grand strategy and alliances. To be sure, the end of Trump-era erraticism would be a welcome change. But at least in this one realm, it’s unclear whether continuity in the longtime policy is a good thing. A debate is overdue.

Jennifer Lind is an associate professor of government at Dartmouth, and the author of Sorry States: Apologies in International Politics. Follow her on Twitter @profLind.

Daryl Press is an associate professor of government at Dartmouth, and the author of Calculating Credibility: How Leaders Assess Military Threats (Cornell, 2005) and The Myth of the Nuclear Revolution: Power Politics in the Atomic Age (Cornell, 2020).