Joe Cirincione and Catherine Killough: Our North Korea Prediction for 2019 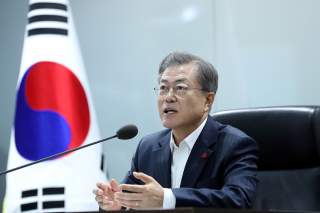 President Trump is to blame for bringing the United States and North Korea to the brink of war in 2017; South Korean President Moon Jae-in is to thank for restoring stability in 2018. Moon, through skillful statecraft, did more than avert catastrophe; he upended the status quo. North Korea’s peaceful participation in the Winter Olympics, return of U.S. detainees, disarming of the Joint Security Area, and a self-imposed moratorium on nuclear and missile tests this year alone have demonstrated that Pyongyang is amenable to diplomacy in a manner consistent with US interests. The Koreans are now driving the process. That’s good. Whether Kim Jong-un will fulfill his June 2018 commitment to pursue denuclearization will depend on three key factors in 2019.

Donald Trump: North Korea is the one area of the world where Trump could secure a foreign policy victory. He must overrule the failed, maximalist demands of Secretary Mike Pompeo and Security Advisor John Bolton. If he strikes a partial deal at the next summit, he could establish a step-by-step process that could advance security assurances to North Korea and begin suspension and dismantlement of its nuclear infrastructure.  It will be partial, and uncertain, but it will give Moon what he needs to advance stabilization efforts on the peninsula.

The New Congress: The Democratic leaders must resist their foolish attempts to attack Trump from the right on North Korea (and Iran). Trump’s diplomatic opening to North Korea is a good thing; it is his inability to exploit it that is the problem. A Democratic House will rightly restore oversight and accountability. The impulse to resist Trump must not undermine any deal that produces a welcome rollback of the North’s nuclear program and advances peace efforts. Democratic leaders, especially with an eye toward 2020, would be wise to remember that the North Korea problem will still be there with Trump gone, and denuclearization is a ten-plus year endeavor.

John Bolton: It was only ten months ago that John Bolton penned “The Legal Case for Striking North Korea First.” While he’s mostly fallen in line with the administration’s North Korea policy (read: preoccupied with starting a war in the Middle East), you can be sure that the architect behind the collapse of the first and only U.S.-North Korea nuclear deal—the Agreed Framework that froze the North’s bomb program—will be waiting in the wings for another breakdown.

Joseph Cirincione is president and Catherine Killough is a fellow at Ploughshares Fund.