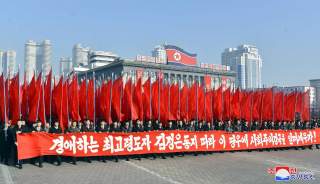 Were North Korean leader Kim Jong-un a complex fictional character, say, like Shakespeare’s Hamlet, he may brood with guilt over having had his uncle killed in 2013 (since Donald Trump was still talking about it in 2019) or having called a woman who has never married or had children a prostitute.

He may even spend his days pondering whether ‘tis nobler in the mind to suffer the proud man’s contumely or whether he should deliver on previous generations’ declarations of denuclearization and relinquish the “supreme national task” of Korean consummation—and thus cut off two score and ten years of fearing death. Almost certainly, Kim’s daily deliberations would be sicklied o’er with the pale cast of denuclearization.

But because the chirpy Korean, unlike the moody Dane, is bold and courageous—not to mention “very candid and polite, sincere, and respectful of elders”—he would never, like Hamlet, waver on an existential matter like the “denuclearization of the Korean peninsula.” Quite to the contrary, he would take decisive action.

So, he did, one again, on New Year’s. The North Korean catchphrase of the year’s end party meeting was “proactive and offensive measures,” although North Korea’s official Korean Central News Agency mistranslated the Korean adjective, “적극적,” which means “proactive,” as “positive”.

The Great Leader does not flip-flop. He knows how dramatically to change his position from belligerent and buffoonish to conciliatory and civilized, as the world saw on New Year’s Day in 2018. The mood swing from molto agitato in 2017 to placido in 2018 was not the product of Trump’s threat of “fire and fury” (Kim did lob a missile over Japan three weeks after the threat and, just five days later, carry out his nation’s first hydrogen bomb test), but of strategic planning. The opposite, a sudden proclivity to embrace bellicosity this year, is also the case. Just as a period of provocations must be followed by a period of phony peace ploy, after a period of beautiful smiles and beautiful letters must come harsh words and “shocking actual action,”—as the decisive dictator declaimed on the first day of 2020.

In fact, the real Kim Jong-un, somewhat “rough,” yes, but nonetheless, in the popular imagination, basically well-meaning and reform-minded (just as his father was), took bold action to effect worldly-minded goals in 2018, the consequences of which impinge on his decisions today. Kim’s achievements in his first signed agreement with Trump in Singapore in June 2018 were entirely predictable, which are:

II. Build a “lasting and stable peace regime” in the Korean peninsula (swallow up the prosperous South Korea once the unseemly Americans are gone and rule over the new United Democratic People’s Republic of Korea in perpetuity).

III. Pledge to work toward complete “denuclearization of the Korean peninsula” (dislodge the U.S. military from South Korea and Japan).

Admittedly, these are still only aspirational goals pledged by the two parties, perhaps even unbeknownst to one of them. Kim’s ultimate goal of evicting the U.S. Forces from South Korea and Japan, thus rendering both nations vulnerable to his extortionist schemes, are by no means faits accomplis. Yet, by dangling before the U.S. and its dependent allies the mere possibility of denuclearization, Kim has incentivized the United States, South Korea, and Japan to practice self-censorship on speaking out against his ongoing crimes against humanity.

If South Korea, the self-avowed sole legitimate, democratic government in the Korean peninsula, and Japan, widely regarded a model democracy in the post-1945 world, are prone to going wobbly on Kim Jong Un’s human rights abuses despite the U.S. having their back with troops presence on their soil, just imagine the possibilities for Kim’s censorship against and exploitation of these wavering, risk-averse introspective democracies once the U.S. presence in the region is diminished.

Which is precisely what drives Kim Jong Un’ carrot-and-stick strategy vis-à-vis the U.S., now entering its terminal phase. No matter how accommodating of Pyongyang Seoul is, to Kim Jong Un South Korea by its very nature is Fortinbras’ Norway to Hamlet’s Denmark; that is, a constant security threat and the leading candidate to inherit your kingdom.

Hence, the return of “Rocket Man” and “U.S. dotard” sweettalk in recent weeks amid the North’s threats of “bigger catastrophic consequences” adumbrates a serious provocation in the works.

In 2016, Kim approved his nation’s fourth nuclear test on January 6, just two days shy of his birthday. In 2013, the North conducted its third nuclear test on February 12, amid Chinese Lunar New Year holiday, Xi Jinping’s first as the top leader of China. With Lunar New Year’s Day falling this year at the end of the month, January is an opportune time for Kim to send a message to both Washington and Beijing that he means what he says—that he will continue to advance his strategic weapons and conduct “the strongest hydrogen bomb test over the Pacific Ocean,” as Kim’s foreign minister warned in September 2017.

Such a test, as provocative as it would be, would mark a watershed moment for North Korea—the Kim Dynasty’s “complete, verifiable, irreversible, and de facto/de jure” arrival as a nuclear state. In other words, the perpetuation of Kim Jong Un’s cruel rule, the creation of a new status quo in Korea, under which North Korea effectively becomes the sole, legitimate Korean state. Life will happily go on, as much of the world will grow apathetic to the new reality, even as some brood that the once-creative South Korean singers and songwriters are reduced to extoling each day the Great Leader’s bold and courageous resoluteness.

Sung-Yoon Lee is Kim Koo-Korea Foundation Professor of Korean Studies and Assistant Professor at The Fletcher School at Tufts University, and Faculty Associate at the U.S.-Japan Program at the Weatherhead Center for International Affairs at Harvard University.