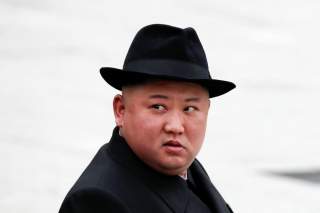 Korea watchers have been surprised that North Korean leader Kim Jong-un failed to provide a 2020 New Year’s address, as he has done in the past. Instead, he has apparently substituted, without explanation, a report of the North Korean Workers’ Party Plenary meeting completed on December 31.

And thus the North Korea regime has once again justified and explained itself by using deception. Indeed, North Korea has described itself as a “workers’ paradise” when in reality North Korean workers live an impoverished life while suffering from brutal political control. The report includes other deception such as claiming that the North Korean public health system is, “best in the world…,” an extreme deception. The North Korean regime appears to use such deceptions to maintain control and avoid internal dissent.

The specifics of the North Korean regime’s deceptions, intermingled with some truth, offer important insights on the regime’s thinking and attitude toward the United States and toward North Korean denuclearization. The regime’s deceptive vilification of the United States reflects the regime’s paranoia: “The DPRK-U.S. stand-off which has lasted century after century…”, the U.S. has applied “the most brutal and inhuman sanctions … over the past seven decades,” and the U.S. has made North Korea the “‘…target of its preemptive nuclear strike…’”

Ultimately, the key question is whether North Korea is prepared to make the nuclear weapon versus sanctions tradeoff. The report suggests that Kim is not: “If there were not the nuclear issue, the U.S. would find fault with us under other issue, and the U.S. military and political threats would not end.” “He solemnly declared that there is no need to hesitate with any expectation of the U.S. lift of sanctions...” The United States seeks “to completely strangle and stifle the DPRK.” Indeed, the report says that “the U.S. is raising demands....”

The United States may be increasing sanctions, but its key demand remains the same: North Korean denuclearization, exactly as Kim offered when in March 2018 he asked for a summit meeting with President Trump. In the April 27 2018 Panmunjom Declaration, Kim committed to the full denuclearization called for in the earlier 1992 Denuclearization Declaration which says the South and North will “not test, manufacture, produce, receive, possess, store, deploy or use nuclear weapons” or “possess nuclear reprocessing and uranium enrichment facilities.” The North Korean regime is in extreme violation of this element of the Panmunjom Agreement, having probably doubled its nuclear weapon destructive potential since March 2018 while eliminating no nuclear weapons or production facilities.

The North Korean regime does not seem to understand this. Instead, it appears prepared to launch a coercive campaign to secure more concessions, while offering little or nothing in return. The report threatens that the North will restart its missile and nuclear weapon tests, which of course it has already partially done with 25 missile tests in 2019. The report threatens to demonstrate a “new strategic weapon” in the near future. Such a demonstration could lead to an unwanted escalation spiral.

This report is, of course, another element in the North’s information campaign against the United States and South Korea. One of the biggest concessions the U.S./ROK have made to North Korea is to minimally respond to the North’s information campaign. This approach has left many people in the region confused by the North Korean deceptions that have not been countered, suggesting that the deceptions could be true. One of the best ways for the U.S./ROK to respond to the report’s threats could be to enhance their information operations, seeking to explain the North Korean deceptions.

In the end, a key question is: why did Kim allow the party plenary report to replace his traditional New Year’s Address? As with many things in North Korea, we do not know, forcing us to speculate. At least one possibility is that Kim Jong-un fears that his pattern of failures in 2019 has significantly undermined his position as the god of North Korea. He may have concluded that the statements made even by the rubber stamp Workers Party Plenary would be more authoritative than his own address. This is not to say that there is serious instability in North Korea, but rather that Kim Jong-un may be worried about the possibility of such instability. If this is true, Kim may be prepared to take more serious risks in the future because he is worrying about losing control of North Korea. This would potentially be very dangerous.