Kim Jong-Un Wants a Good-Will Gesture, and Biden Should Give It 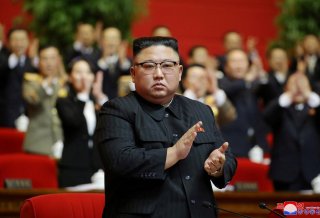 Listening to North Korean leader Kim Jong-un is, necessarily, an exercise in discernment. A man who would be laughable were he not so monstrous, he festoons every public statement with insults and absurdities that often overshadow the more serious political content. The challenge is to parse what is significant and what may be ignored as his typical theatrics of tyranny.

This was true of Kim’s latest comments, reported in North Korean state media Saturday. In the theatrics category, we may place Kim’s call to continued “focus on controlling and subjugating the United States.” Even with its nuclear arsenal, there is no scenario in which North Korea—small, poor, often starving thanks to the morally and financially bankrupt autocracy Kim runs—could overpower the United States. The balance of America’s military deterrence, both conventional and nuclear, is overwhelming, as Kim well knows.

But look past this nonsense and it’s possible to see that Kim is attempting some rapprochement with the incoming Biden administration. Pyongyang will “not rule out diplomacy,” he said, describing the weapons build-up of which he’d boasted as a way to “drive diplomacy in the right direction and guarantee its success” for bringing “peace” to the Korean Peninsula. He indicated a willingness to shift his regime’s behavior should President-elect Joe Biden move away from the Trump administration’s counterproductive “maximum pressure” approach. Pyongyang will answer “force with force,” Kim said, and “goodwill with goodwill.”

This may be as close as Kim will come to pleading with Biden for relief from the punishing sanctions regime the U.S. leads against North Korea. It is a crucial opening, and one Biden should use to shake off the torpor into which U.S.-North Korean relations have fallen since the first summit between Kim and President Donald Trump in 2018.

One of the first acts of the Biden administration, then, should be an easing of restrictions on North Korea, both for the sake of the North Korean people—who are facing floods, pandemic, and severe economic contraction on top of the usual abuse and privation of Pyongyang—and as a show of the goodwill Kim claims he’ll reciprocate.

Offering this relief would not put U.S. security at risk. All the architecture of our deterrence would remain intact, and Kim would continue to understand that aggression against the United States or its close allies would cost him his power, if not his life. That’s a compelling constraint for Kim, who has made clear that the very purpose of his nuclear arsenal is deterrence of forcible, U.S.-orchestrated regime change. However wild his rhetoric, Kim is not foolish enough to think he can challenge the United States militarily and win. This status quo, which on balance has not significantly altered in the Trump era, is far from ideal, but the United States can thus coexist with North Korea indefinitely.

For Biden, a move away from the failed maximalism of the last few years could make space for new diplomatic progress. In fact, offering sanctions relief is the best method of inviting Pyongyang back to the negotiating table. It allows Washington to initiate diplomacy in good faith and humanitarian support for the freedom and prosperity of ordinary North Koreans, not as a reaction to Kim’s provocations. Pyongyang has a habit of lashing out when talks stagnate, as it did with missile tests and the destruction of the liaison office in the demilitarized zone last year. By lightening the U.S. sanctions load, Biden can restart diplomacy without reinforcing that pattern.

With that accomplished, the U.S. priority should be patient, working-level talks in pursuit of achievable, cumulative aims, like the economic and social opening of North Korea, a treaty for the Korean War, and a nuclear freeze. Biden should also work toward transference of the diplomatic lead to South Korea, which has cultural proximity and national interest in normalizing its northern neighbor, which is something that Washington could never match. Denuclearization may be retained as a long-term goal, but it is not realistic in the near term, and fixating on it as an all-or-nothing demand has again and again proven an impediment to peace. Kim’s new overtures give Biden an opportunity to reject that fixation, and it is an opportunity he should seize.