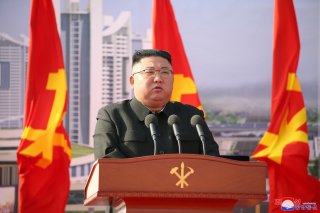 The past year and a half have not been kind to North Korea. The country has been buffeted by numerous disasters which, collectively, have taken a toll on the population. While it is impossible to know with certainty the degree to which North Koreans are suffering from Covid-19, the health and economic impacts of the pandemic have been significant. Lacking a robust healthcare infrastructure outside of Pyongyang, the chances are good that the North’s citizens have been hit hard by the virus—notwithstanding the government’s protestations to the contrary. In response to the virus, the regime locked down several cities and cut off imports from China. Combined with drought, flooding, and an inadequate distribution system, food shortages have resulted from Pyongyang’s pandemic mitigation efforts. The government also recently cracked down on the use of foreign currencies to bolster the credibility of the North Korean won, creating inflationary pressures at the worst possible time. On the ideological front, the regime is waging a rearguard action against foreign pop culture through punishments and patriotic inducements, efforts that proved counterproductive in other strained totalitarian states.

While the domestic situation is “tense,” as Kim recently conceded, the international environment is at present remarkably forgiving. None of the three states that most affect the North’s security has an appetite for heightened tensions with Pyongyang. Ever fearful of a failed state on its border, China’s leadership continues to be a willing source of vital commodities. In South Korea, Moon Jae-in’s policies seek dialog with the North. Indeed, Moon is likely to redouble his outreach to the North as his term in office nears its end. Meanwhile in Washington, the Biden administration has adopted a cautious and balanced North Korea policy. Although Biden plans to extend existing sanctions on the regime for another year, Washington’s overall strategy is aimed at making stepwise progress on denuclearization through incremental doses of sanctions relief. This policy reflects the reality of the North’s nuclear deterrent and the realization that a future attempt to compel the regime to disarm will fail as badly as it has in the past.

The international environment cannot be characterized as benign for North Korea, but there does exist sufficient slack in the international system for the Kim regime to bolster its position domestically. For example, import and aid restrictions on food and medicines could be lifted. If the regime were to welcome support from abroad, it could head off a replay of the “Arduous March,” the period of mass starvation in the North from 1994-1998. Yet, there are reasons to believe that Kim Jong-un is even less likely to accept assistance from abroad than was his father, Kim Jong-il, in times of trouble. Since his assumption of power in December 2011, Kim Jong-un reinforced the state ideology of juche, which emphasizes the principles of self-sufficiency and independence in a hostile world. To accept aid from abroad during a crisis would conflict with the state-sponsored message of extreme self-reliance.

How Kim contends with these conflicting pressures will affect the lives of millions of North Korean citizens. Unfortunately for those living in this totalitarian state, the evidence suggests that Kim is doubling down on isolation, sacrifice, and self-reliance. Among the regime’s targets are the “alien ideology, culture and lifestyles” found abroad, the “malignant tumor that threatens the life and future of our descendants.” Juche, it seems, is here to stay. The consequence will be a further erosion of the state’s capacity to address the confluence of economic, biological, and environmental challenges confronting it.

Spencer D. Bakich is a professor of international studies and the Director of the National Security Program at the Virginia Military Institute, and a Senior Fellow at the Miller Center at the University of Virginia. He is the author of Success and Failure in Limited War: Information and Strategy in the Korean, Vietnam, Persian Gulf, and Iraq Wars.