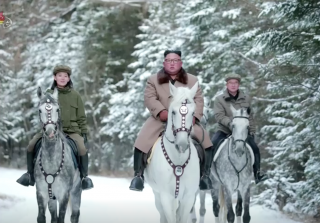 Editor's Note: This piece is part of a two-part series on Kim Yo-jong. For details surrounding Ms. Kim’s childhood and ancestry, please refer to Part I.

Negotiations between the United States and North Korea stalled after no meaningful progress towards peace or denuclearization talks before the end of 2019. As a result, the future of U.S.-Democratic People’s Republic of Korea (DPRK) relations remain unclear. However, while the status of the U.S.-DPRK relationship has fluctuated, North Korea’s leadership has remained largely consistent. Kim Yo-jong is one of the most important North Korean leaders. She is the sister—and secretarial assistant—to Chairman Kim Jong-un and an elected official of the Supreme People’s Assembly. Ms. Kim plays an important role in protecting the portrayal of her brother in North Korean media, something she has had experience with since her time working for their father, Kim Jong-il.

After the death of her father, Ms. Kim quickly ascended the ranks within various DPRK bureaus, ultimately becoming a crucial supporter to Kim Jong-un during his transition to power. Moreover, Ms. Kim has become a diplomatic figure in her own right. During the 2018 Pyeongchang Olympics, she became the highest-ranking member of the Kim family to visit South Korea since the end of the Korean War. Her visit paved the way for her brother to arrive in the South a few weeks later. In addition, she was chosen to extend condolences on behalf of Kim Jong-un over the death of Lee Hee-ho, the wife of former South Korean president Kim Dae-jung.

Recently, Ms. Kim has become even more of a prominent figure in North Korean media. For instance, Ms. Kim can be seen watching missile tests alongside Kim Jong-un. Moreover, she is now regularly featured inspecting sites with her brother—such as his visit to Yangdok County Hot Spring Resort. Not too long ago, she was also pictured riding horses with her brother (see image above) on Mount Baekdu—a sacred mountain in North Korean mythology considered to be the “birthplace” of the Kim dynasty. Though Ms. Kim has held numerous high-ranking positions—such as her post as first vice director of the Propaganda and Agitation Department (PAD)—her presence in the photoshoot on Mount Baekdu is one of the first instances in which she herself has been idolized. This is important because idolization of national leaders through propaganda photos signals to North Koreans and the world who is in charge. In fact, the photo of Ms. Kim on a horse near Kim Jong-un mimics previous imagery of Kim Il-sung with his wife. However, this time instead, Ms. Kim is in a position of power.

Yet, to understand how Ms. Kim reached her current stature, it is necessary to understand how the roles she’s held along her ascension to power have influenced her reach and influence in North Korean politics. Due to her prominent position in the North Korean leadership structure, we present the following information as a guide to her rise and what prospects may lie in her future.

Kim Yo-jong’s partly-overseas childhood provides insight into the environment in which she was raised and how her strong connection with her brother may have been forged. However, the formative years leading up to her ascent to power in North Korea’s regime are shrouded in secrecy. As a result, much of the information about her teenage years and higher education is speculative by nature—based on the testimonials of visitors and defectors. The following is the best understanding we have of what occurred after Ms. Kim’s return to the DPRK from her education in Switzerland.

Upon Kim’s return to North Korea in 2001, details about her schooling and whereabouts are mostly unknown. It has been reported that Ms. Kim did not attend school after her return to North Korea, instead learning from private tutors. To learn more, we interviewed Michael Madden, a key contributor to the North Korea Leadership Watch and a leading analyst for 38 North. In the interview, Madden noted that recent reports indicate Ms. Kim studied political economy at Kim Il-sung University from roughly 2005 to 2008—not computer science, as previously thought. Madden also notes that Ms. Kim is reported to have taken classes without the presence of a bodyguard. Interestingly, she seems to have actively engaged in sports and other extracurricular activities with other students. She was said to have been extremely well liked among her classmates and was known for her friendly demeanor. Furthermore, Ms. Kim has likely been a member of the Workers’ Party of Korea (WPK) since at least 2007, performing administrative tasks for either her aunt or her father.

2008 marks the next year Kim Yo-jong was seen by any foreigners since she left Switzerland (other than the Kim family’s Japanese chef, Kenji Fujimoto). When French doctor François-Xavier Roux was called in to North Korea to treat Kim Jong-il after a stroke, he notes often seeing a young woman who resembled Kim Yo-jong by his bedside.

In 2009, she was photographed at Wonsan University of Agriculture during a visit with her father, her brother Kim Jong-un, and other party officials, including Kim Ki-nam. During this time, Ms. Kim is believed to have played a role in helping plan Kim Jong-un’s rise, as 2009 is also the year in which he was announced as Kim Jong-il’s successor. It is also in 2009 that Kim Yo-jong is believed to have begun working in the Party Central Committee (PCC).

Though Ms. Kim’s meteoric rise to power began after the death of her father, she was likely groomed for a high-ranking role within DPRK leadership since her time in college. At the very least, she began performing administrative tasks on behalf of her aunt or father. Before her promotion to a position on the National Defense Commission in 2012, she sometimes accompanied her father as a member of his personal secretariat, attending inspection sites with close members of his administration. The extent to which Ms. Kim was involved in her father’s secretariat is difficult to assess, as her presence at events was rarely publicized during this era—though, as mentioned, it’s generally believed she has been an active member of the party since 2007. In this role, Ms. Kim is reported to have been photographed in 2010 at the 3rd WPK Conference, seated closely with Kim Ok—her father’s alleged mistress and possible fourth wife.

However, Ms. Kim first began to gain publicity in 2011, following the death of her father and his subsequent funeral broadcast. Throughout the proceedings, she could be seen leading various high-ranking officials in paying respects to her father. By 2013, Ms. Kim had been promoted to acting director of the National Defense Commission. During this time she also often accompanied her brother as his “tour manager,” and was even photographed attending and voting in the elections for the Supreme People’s Assembly in 2014.

In 2015, she surpassed long-standing official Kim Ki-nam as the first vice director of PAD, taking on a role that allowed her to influence propaganda and media throughout North Korea. In taking on this position, Ms. Kim became one of the youngest people to ever become vice director—her father was also promoted to the position when he turned 27. It is in this role that she is believed to have made the most impact, for Kim Jong-un’s cult of personality began to exhibit patterns that were meant to mimic the aura of his grandfather, Kim Il-sung. As PAD’s most powerful director, Ms. Kim is likely the figure behind the reversion to an public aesthetic more akin to Kim Il-sung than Kim Jong-il during the Jong-un era. Rather than take on the firm leadership role of his father, Kim Jong-un began to soften his image. This strategy differentiated Kim Jong-un from his father early on in his transition and holds nostalgic value for older North Koreans. As such, Ms. Kim will probably continue making suggestions that will strengthen KJU’s cult of personality.

However, Ms. Kim’s rise to power didn’t happen without incident. According to sources cited in Daily NK in Japan, in May of 2015 around a dozen of Kim Yo-jong’s classmates from Kim Il-sung University vanished simultaneously. It was later reported that they were exiled for revealing that they were her former classmates, though the source notes that it is unlikely that Ms. Kim knew of their impending exile and others still doubt that such a trivial statement could have caused their removal.

Though Ms. Kim previously has served as an alternate member of the Supreme People’s Assembly since 2017, she was officially elected into a position representing Killimgil through the 2019 North Korean Parliamentary election.

Ms. Kim’s role as a member of the Kim family has allowed her to become an important figure in North Korean diplomacy. During the 2018 Pyeongchang Olympics, despite being outranked by numerous other officials in the delegation, she was perceived as the de facto leader and was even beckoned by Kim Yong-nam—the former President of the Presidium of the Supreme People’s Assembly of North Korea—to take the center seat in a meeting with South Korea’s unification minister. Ms. Kim was also the individual chosen to relay an invitation to Moon Jae-in for a meeting with Kim Jong-un in North Korea.