Know This: North Korea Isn't Desperate for a Nuclear Deal with America 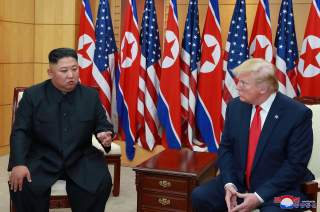 North Korea hardly is desperate to negotiate an agreement with the United States ending or even merely limiting North Korea’s nuclear-weapons program.

“Pyongyang would certainly appreciate the lifting of sanctions, a peace treaty, investment and trade, but it has other options, too,” an analyst from 38 North, a think-tank associated with the Washington, D.C. Stimson Center, explained in a July 2019 report.

Trump is the first U.S. president to step foot in North Korea. But is handshake with Kim, as well as two previous Trump-Kim meetings on foreign soil, legitimized Kim’s brutal rule while doing nothing to halt North Korea’s nuclear program.

“Misinterpreting North Korea’s situation is dangerous,” 38 North’s analyst added. “If talks are based on the assumption that Pyongyang needs a deal, and that it believes it can only reach one with Trump, then it would be tempting to believe that concessions can be extracted from the North Koreans before the 2020 U.S. presidential election.”

“If he is not reelected, and that is a big ‘if,’ the window of opportunity will have closed.”

But Kim might already have gotten from Trump everything he wanted, all without giving away anything. He might not fear the effects of ongoing sanctions or the consequences of passing up the opportunity to lift those sanctions.

The assumption that Pyongyang is desperate for sanctions-relief, and thus willing to trade its nukes for market-access, “is based on the expectation that North Korea, like any other country in the world, will be technically unable to achieve high economic growth if the U.S. does not want that,” 38 North’s expert explained.

The logic behind this is, more or less, that no company or country of any significant size would dare violate a U.S. or U.S.-backed embargo on trade, financial transactions and technology transfer.

This argument, however, might not hold true for that much longer in a changing geopolitical landscape.

North Korea could well become a pioneer in this regard. From its founding until around 1990, it had already been able to benefit greatly from a bipolar world order. Cold War 2.0 is coming between the U.S. and China.

For Europe, with its dependency on global supply chains and free trade, this will be catastrophic. But North Korea might once again be able to benefit from such a situation, like it did under Kim Jong Un’s grandfather, Kim Il Sung, who was, as even his opponents agree, a master in extracting concessions from economically and militarily superior partners.

This is not hypothetical. If South Korean figures are correct, Pyongyang has accumulated a trade deficit of a remarkable $26.6 billion since 1990, according to the Korea Trade-Investment Promotion Corporation’s annual trade reports. That is 10 times the country’s export volume of the fairly successful year 2015.

North Korea has been, even under the complicated conditions of the last three decades of a unipolar world order, able to find someone who was willing to pay its bills. Imagine what would happen if support for North Korea, no matter what a difficult ally it might be, becomes a matter of principle again for a great power, as was the case before the Soviet Union imploded.

There is evidence that Pyongyang already has shrugged off the threat of unending U.S. sanctions. Even as Trump and Kim met for the third time, activity continued at the uranium-enrichment plant at North Korea’s Yongbyon Nuclear Scientific Research Center, according to 38 North.

“River-dredging continues,” 38 North analysts reported after scrutinizing satellite imagery in early June 2019. “[W]e also note the addition earlier this year of an elevated conduit at the Radioisotope Production Facility that connects the RPF to two nearby industrial-type buildings.”

“We continue to see activity around the Uranium Enrichment Complex in terms of vehicles, equipment and personnel arriving and departing. Imagery shows what appears to be a white tanker trailer near the far west end of the complex on Feb. 16 or 17 until the morning of March 27, [2019],” the experts explained.

That’s not what desperation looks like. And that bodes poorly for the prospects of a deal to limit North Korea’s nukes.