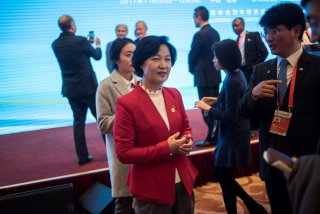 The arrest of Shincheonji leader Lee Man-hee on July 31 did not create sensation nor celebration in South Korea but more of a collective shrug. Nonetheless, embattled Justice Minister Choo Mi-ae is trying to leverage the arrest of the unpopular figure to defend herself from criticism over her alleged interference in the public prosecutors’ office.

The reason for the muted response is because Korea has already gotten coronavirus pretty well under control. With only about thirty or forty new cases a day, the cover-up by the Shincheonji Church of Jesus, at once a national scandal and international news in February, does not seem such a significant event in hindsight. The global spread of coronavirus shows that, one way or another, coronavirus was going to make its way to South Korea. Comparatively speaking, Korea has not been hit too hard.

After United Future Party (UFP) Rep. Jang Je-won aggressively questioned Choo in a video that went viral, Choo fired off a tweet thread suggesting a conspiracy. The broadcast video was made three days after the arrest warrant for Lee was issued, she wrote.

“I am now working hard to complete the big task of prosecution reform. However, prosecution reform is facing constant resistance and attack from the conservative media and the UFP. . . . Religious groups joined in there. Whether this is simple coincidence or an organized attack is something we should consider with the public,” she wrote in summation.

Jang responded by accusing Choo of pushing a made-up conspiracy theory. “Minister Choo is cleverly tying the press and the United Future Party to a religious group that is facing widespread criticism,” he said.

Jang’s line of questioning dealt with the scandal over Choo’s son allegedly receiving special treatment while carrying out his mandatory military service. In 2017, when Choo was serving as chairperson of the Democratic Party, her son failed to show up to his base on time, making him AWOL. Choo reportedly contacted the military and had them extend his leave.

Lee Jong-eun, an adjunct instructor at American University’s School of International Service, said the Choo controversy could develop into a similar scandal if proven conclusively. “But, as of now, it does not seem there is ‘smoking gun’ evidence, so it seems to have turned into a muddled allegation,” he added.

The UFP’s displeasure with Choo runs deeper, however. They are fundamentally opposed to her prosecutorial reform plan and her attempts to control the prosecutor general. The Democratic Party has passed a bill to create a new office to investigate allegations against prosecutors and judges, taking power out of the hands of prosecutors. The conservative party, then the Liberty Korea Party, tried to block the bill.

Now, Kwan Gi-won, a legislative aide for a conservative party, says Choo will likely be able to get the new office created since her party has a supermajority in the Assembly: “Choo Mi-ae is a very strong and powerful person.”

At the same time, the UFP has sided with current Prosecutor General Yoon Suk-yeol in his feud with Choo. Yoon has been investigating a number of Democratic Party members and allies of the Moon administration, including the aforementioned Cho Kuk, Democratic Party Mayor of Ulsan Song Cheol-ho, comfort women activist and Democratic Rep. Yoon Mee-hyang, and former Seoul Mayor Park Won-soon, also a Democrat, who committed suicide after the claims of sexual harassment against him were made public.

Choo responded in January by reassigning many of the prosecutors, including some of those who investigated Cho Kuk, and she has continued to up the ante all year. In fact, Democratic Party leaders have demanded Yoon resign his position as a prosecutor. The Seoul prosecutor’s office has initiated its own investigation to one of Yoon’s top allies, fellow prosecutor Han Dong-hoon, who is accused of attempting to smear a pro-Moon intellectual.

Yoon warned in August that Choo’s interference in the office of the prosecutor could lead to “dictatorship.” The editorial boards of some of Korea’s leading newspapers agree with Yoon and the UFP’s perception that Choo’s actions constitute illegitimate interference, including the Korea Herald, the Korea Times, and the JoongAng Daily. The media hasn’t exactly reported very favorably on Shincheonji.

But it’s not a surprise that Shincheonji is also angry with Choo since the arrest of their leader. They have also issued a petition calling for Choo to resign. Collusion? By that standard, you could say almost anyone who is charged with a crime by the existing government and pleads innocence is in collusion with each other.

That two groups with different agendas would oppose the same justice minister for different reasons sounds like an easy case of coincidence.

Lee Jong-un said the suggestions by Choo of “organized attack” is just an arrow to be wielded in her continuing battle with the opposition. “It’s not her main strategy . . . just another distraction.”