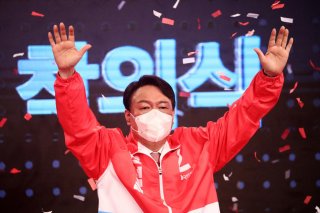 South Korea’s 2022 presidential election promises a showdown between two populists who come from outside the ruling bloc of their respective parties.

Yoon was not a member of the People Power Party and not even a political candidate when he tendered his resignation as Prosecutor General in March 2021. He only joined the party one day after jumping into the race. Yet he won the admiration of conservatives who saw him as standing up to the power-hungry Moon Jae-in presidential administration and its meddling Justice Ministry.

While Yoon was attending Seoul National University (SNU), Korean general Chun Doo-hwan seized the power of the presidency and declared martial law in 1980, cracking down on protests across the country and killing hundreds in Gwangju. Yoon took the mantle of the prosecution in a mock trial at SNU and demanded the death penalty for Chun. During Chun’s dictatorship, making such an argument was not only controversial, but also dangerous.

Yoon fled to Gangwon, the province his mother hailed from, and laid low for a while. Upon returning to his studies, he failed to pass the second round of the bar exam nine times. The Jugan Kyunghyang has noted that it was common at the time for students to be blacklisted on such tests on the basis of their political expression. While unconfirmed, the weekly newspaper speculated that Chun might have been punished for his involvement in the mock trial.

Yoon passed the bar in 1991, three years after Chun stepped down, and began his career as a public prosecutor in Daegu in 1994. A new era of democracy had arisen, in which corrupt politicians were to be held to account. Chun was investigated and sentenced to death in a real-life courtroom in 1996. (His sentence would be reduced to life in prison on appeal and commuted by President Kim Young-sam.) In 1999, Yoon arrested National Police Agency intel chairman Park Hui-won on corruption charges, triggering backlash from then-President Kim Dae-jung’s administration.

Over the course of his career, he would investigate matters relating to every Korean president and come into conflict with many of them. When he was investigating the National Intelligence Service for engaging in a propaganda campaign supporting the presidential campaign of conservative candidate Park Geun-hye in 2012, he was attacked by conservative leaders as a “left-wing prosecutor.”

When he was investigating Moon’s Minister of Justice Kuk, a progressive favorite, Democrats called for his resignation. Moon’s current Minister of Justice, Choo Mi-ae, fired or reassigned many of Yoon’s allies in the prosecution office. Yoon decried the “tyranny” of the Moon administration. Finally, Yoon did resign on March 4, 2021, following a series of court battles over the Moon administration’s attempts to suspend him.

The prosecutor who had made his name taking down the conservative darling Park—in a 2016 corruption case that right-wing conspiracy theorists still regard as a hoax—had become a hero of the anti-Moon right. He made protecting rule of law and liberal democracy the theme of his announcement speech: “The current administration is trying to remove freedom from the liberal democracy, which is the foundation of the constitution. … If we do not achieve a regime change, the world will be dominated by demagogues and corrupt interest cartel.”

Yoon speaks bluntly and at times hyperbolically. He is unpolished and fond of sharing his opinion on any issue veteran politicians would abstain from addressing, doing so in ways that leave him open to what his supporters would view as media smears that take his words out of context. On issues from women’s rights to food safety to work hours and more, he has drawn fire.

On October 19, while campaigning in Busan, he remarked, “There are people who say that if you exclude the military coup and 5.18 [the Gwangju massacre], former President Chun did well in politics. Quite a few people in Honam [the progressive southwestern region that includes Gwangju] say that.”

Such comments might bring down an ordinary candidate. He walked them back half-heartedly. Some sympathetic analysts said he was merely praising Chun’s administrative abilities. Others said he was ingratiating himself with the conservatives in the Yeongnam region opposite Honam. But now Yoon finds himself the nominee of an opposition party with a motivated base, neck-in-neck with his opponent, with five months to go before the election.

You might say that besides his lack of restraint (or maybe because of it), Yoon Seok-yeol is an expert at politics.