Korea's Future Is Dying (Thanks to Demographics) 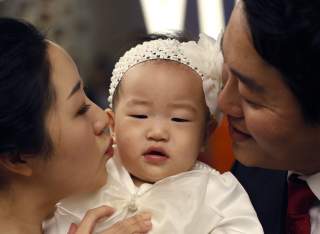 Threats to South Korea’s survival are not only from the North. Even as Seoul seeks detente with its communist neighbor while engaging in an increasingly bitter row with Japan, the nation’s demographic decline could see its economy facing a similar structural slowdown that puts a permanent brake on growth.

The challenge facing Korean policymakers was highlighted by a recent government report, which showed that its falling fertility rate could see its population start declining as early as 2020.

Previous estimates in 2016 suggested the population would peak in 2023 under only the most pessimistic scenario.

Released in March this year, the report by Statistics Korea predicted South Korea’s population could peak at around fifty-one million this year, before dropping to the 1972 level of around thirty-four million by 2067 under the most pessimistic scenario.

Seniors aged sixty-five and older would account for nearly half the population by 2065 under even the medium-growth scenario, making it the grayest developed nation in the world and potentially threatening its military capabilities.

In contrast, immigration-friendly countries such as the United States, Canada and Australia are seen having a quarter or less of their populations who are sixty-five years old or older over the same period.

South Korean women are clearly having fewer children, according to the latest figures, with a fertility rate—the average number of children born per woman—dropping to a record low of 0.98 in 2018. This was lower than Japan’s 1.43 and well below the estimated “replacement-level fertility” rate of around 2.1 for most nations.

In 2017, just 14 percent of South Korea’s population was sixty-five years old or older—around half Japan’s share. Its proportion of working-age people between fifteen and sixty-four was 73 percent, but this could shrink to just 46 percent by 2065 under the medium-case scenario, putting it even below Japan’s 51 percent ratio.

Similar to Japan, the aging population reflects economic challenges for the youth in tying the knot. A 2015 survey found that 58 percent of men ages twenty to forty-four were unwed, along with 48 percent of women—a damning statistic where just 1.9 percent of children are born outside of marriage.

Statistics Korea estimates that the total dependency ratio, representing the number of dependents (children and senior citizens) supported by every one hundred members of the productive population, could rise from 36.7 in 2017 to 120.2 by 2067. The median age is also seen rising from 42 in 2017 to 62.2 over the same period.

Experts blame the expense of childrearing, the high youth jobless rate and the burden placed on working mothers, who still carry out the majority of household chores and childcare. Intensely competitive education and job markets are also seen as factors behind the baby strike.

This [Korean] society is just way too competitive. I don’t think it’s right for any child to go through this system,” a thirty-four-year-old Korean woman told the Agence France-Presse.

Like their Western counterparts, Korean women are increasingly delaying marriage to put priority on higher education and career. The latest data showed more than 30 percent of all women who gave birth in 2018 were thirty-five years or older.

And with the highest gender pay gap in the OECD, South Korean women have little incentive to climb the career ladder, with nearly a quarter quitting work due to “marriage, childbirth or childcare.”

Per-capita gross domestic product (GDP) can still expand in the face of a declining population, as seen in Japan. Yet an aging society drags down investment and productivity growth, ultimately slowing GDP growth.

For the government, fewer workers to support an expanding elderly population will challenge its finances, increasing social welfare spending even while taxation revenues decline.

Moody’s Investors Service has warned that the credit ratings of both South Korea and Japan could come under negative pressure due to “the combination of lower economic growth, higher government debt and weaker debt affordability amid slowing expansion in and aging of their workforces particularly in the 2030s.”

“Weaker debt affordability will materialize in the 2030s as its debt burden increases more sharply, weighing on the government’s fiscal strength,” the credit-rating agency added.

With Korean media claiming the baby bust as “a bigger risk than a currency crisis,” Seoul responded by spending some 117 trillion won ($97 billion) between 2016 and 2018 on measures aimed at lifting the birthrate.

Yet analysts including Hong still see the government facing challenges to preventing a graying society.

Another analyst warned of the threat to retirees.

“At this rate, it will be difficult to maintain the pension system,” Yonsei University economist Sung Tae-yoon told the Japanese daily. “We will need a drastic change to our current policies, such as the intake of immigrants.”

Yet even the most favorable government policies may not reverse the trend.

According to economist Lyman Stone, the current decline in fertility across the developed world “is nearly unmatched in its global breadth and its severity” since the end of the baby boom in the 1960s and 1970s.

For policymakers though, even Nordic-style policies offering extensive family support “appear to have very limited impacts on long-term fertility,” he suggests.

Barring a sudden transformation in the South, could reunification with the North solve the problem?

Not according to the United Nations, which has estimated that North Korea’s fertility rate has started to slowly decline, currently below replacement level at 1.9.

An indicator of what might lie ahead comes from Germany, where reunification led to a rapid decline in the birthrate in eastern Germany post-unification, falling to 0.8, according to Troy Stangarone, senior director and fellow at the Korea Economic Institute of America.

For anyone expecting Koreans to suddenly welcome mass immigration such as seen in the West, last year’s protests over Yemeni refugees should dispel any illusions.

Just 561 refugees from the war in Yemen arrived in South Korea’s Jeju Province, a trivial number compared to the 890,000 asylum-seekers who arrived in Germany in 2015.

Yet despite being restricted to the relatively isolated island of Jeju, the public reacted with “hysteria” according to Foreign Policy, with a petition to the president demanding the government reject the refugees garnering more than seven hundred thousand signatures.

South Korea’s declining population will also pose challenges for its military, which currently has around 625,000 troops defending against the North’s estimated 1.2 million active personnel.

As the number of youth eligible for military service declines, Seoul will find it difficult to maintain its current structure, increasing the pressure on allies such as the United States, which currently has around 28,500 troops stationed in South Korea.

In its latest forecasts, the International Monetary Fund sees South Korea’s GDP growth easing from 2.7 percent last year to 2.6 percent in 2019, driven by weakening external demand. Other analysts such as ANZ Research are projecting just 2 percent GDP growth this year.

The Washington-based IMF notes that “potential growth has slowed down and its prospects are hampered by unfavorable demographics and slowing productivity growth, driven by structural weaknesses.”

For Asia’s fourth-largest economy, averting its demographic decline could prove even more challenging than handling a volatile North Korea or rebuilding ties with Japan, which is already watching its population decrease. Korean policymakers need not travel too far to see a glimpse into the future.