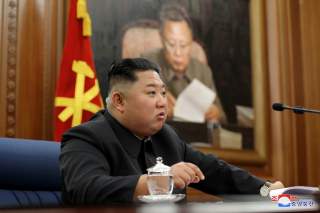 An era is ending, though many are in denial and floundering over the next steps. North Korean leader Kim Jong-un appears to have chosen a path that will end meaningful denuclearization diplomacy with the United States for the foreseeable future and usher in a new chapter in the North Korea saga: living with a nuclear North Korea. This raises the stakes on a longstanding challenge: how the US, South Korea, and Japan can best work together to contain and constrain a permanent and growing North Korean nuclear threat to peace and stability in Northeast Asia.  The three countries will also need some modicum of consensus with China and Russia to forge this cooperation under very adverse circumstances.

This essay explores the options that are available to the United States and its allies to successfully manage this challenge.

Kim Jong-un has followed through on his warning that he would take a “new path” if the Trump administration did not make the concessions (e.g.; lift UN sanctions) he wanted. At the close of the recent Korean Workers Party plenum he laid out what that path will look like: it is a ‘porcupine strategy. The media has mainly focused on his statements that the North “should more actively push forward the project for developing strategic weapons” and that Pyongyang would no longer feel bound to observe the North’s self-imposed moratorium on the testing of nuclear weapons and long-range ballistic missiles.

But Kim delivered a more fundamental message to party, military, and government officials, stressing the need to “rearrange the economic foundations of the country,” as part of a new national project. He also declared that, in addition to developing a much more threatening nuclear force and jettisoning a fruitless dialogue with the United States, North Koreans would have to hunker down for a long-term confrontation with the United States and live with tighter sanctions. In other words, he pronounced denuclearization diplomacy dead unless the DPRK’s more aggressive strategy yielded unilateral U.S. concessions as a precondition to renewed denuclearization talks—a prospect that Kim dismissed as highly unlikely.  As one prominent North Korean expert has observed, Kim is not hedging his bets or maneuvering for more negotiating leverage—he’s initiating a complete strategic policy reorientation, and it’s not the one the United States had hoped for.

The breakdown of U.S.-North Korea denuclearization talks comes after more than twenty-five years of U.S. diplomacy aimed at achieving a nuclear-free Korean Peninsula. Despite vague commitments made at the 2018 Trump-Kim Singapore Summit, Pyongyang has taken no concrete steps since then to dismantle or substantively disable its nuclear weapons program. The fatal flaw was that the United States and DPRK never agreed on a definition of denuclearization. North Korea has continued to develop its nuclear weapons and ballistic missile program, conducting thirteen missile tests since May 2019, testing intercontinental ballistic missile (ICBM) engines, and advancing efforts to obtain an operational SLBM.  It rejected U.S. offers to renew working-level talks and then demanded that the United States make concessions before it would talk was, which was not a serious offer. Instead, it was and is a political device to shift the blame to Washington for the collapse of diplomacy.

This turn of events suggests we are entering new and uncharted territory with North Korea. Kim’s new strategic orientation, which will likely feature demonstrations of new nuclear and delivery system capabilities, appears to validate the views of many US analysts that there are no conceivable circumstances under which Pyongyang would verifiably relinquish all its nuclear weapons. Kim’s goal appears to be to obtain a status similar to Israel or Pakistan as a de facto nuclear weapons state.

Whether North Korea achieves such a status or remains isolated, there is a compelling need for the United States and South Korea, triangulating with Japan and, to the extent possible, China must now develop a common approach to safeguarding peace and stability on the peninsula in a post-denuclearization diplomacy environment. Navigating our way through this challenge could not come at a less propitious moment:

- The Kim regime—buoyed by increased revenues from a variety of legal and illegal sources—Chinese tourism and other lax enforcement of sanctions, illicit revenues from smuggling drugs, and cyber-hacking/ ransomware, has, in effect, decided to muddle through economically for the indefinite future. As Kim said in his plenum remarks, this will mean more belt-tightening and re-emphasize his policy of simultaneously developing nuclear weapons and the economy (Byungjin) to endure a long-term struggle with the United States;

- The U.S.-ROK alliance has been badly frayed by President Donald Trump’s transactional view of alliances and extortionist demands for a 500 percent increase in South Korean cost-sharing for U.S. forces on the Korean Peninsula; continued White House rhetoric denigrating America’s alliance with the ROK, and Trump’s episodic threats to “bring the boys home;”

- South Korea’s relations with Japan, with popular nationalisms pulling in the wrong direction, have reached an all-time low over unresolved historical grievances, competing territorial claims, and trade disputes. Their antagonistic relationship, which shows few signs of easing, is increasing risk by precluding a range of cooperative deterrent activities to monitor and counter the North Korean military threat.

- An increasing number of South Koreans harbor concerns about the credibility of the U.S. extended nuclear deterrent in the face of the growing North Korean nuclear threat and Trump’s denigration of the alliance. These anxieties were reflected in polls after the sixth North Korean nuclear test in 2017, which showed that 60 percent of South Koreans favored the development of nuclear weapons and 68 percent the re-introduction of US tactical nuclear weapons (TNW) on South Korean territory. These numbers are likely to rise in response to future North Korean provocations.

There is a spectrum of options for coping with the current predicament discussed below. Regardless of the U.S. policy choice, Washington should seek an ongoing, authoritative channel of communication with Pyongyang, and be clear that the door for negotiations is always open should Kim reverse course.

However noble the goal of complete, verifiable, and irreversible dismantlement of the North’s nuclear weapons, it ignored several inconvenient truths: it could not be complete absent a credible inventorying of all of North Korea’s nuclear capabilities; it could not be verifiable because the DPRK is not prepared to accept unhindered IAEA monitoring an verification; it could not be irreversible because a clever North Korean with a doctorate in physics and access to fissile material could succeed in making a bomb. Deep mutual distrust and the momentum of a forty years investment in its nuclear program appear insurmountable obstacles. The Kim regime will tend to cling to a nuclear deterrent because it is the ultimate guarantee of survival. The tools of diplomacy—logic, bribes, and threats—have failed over twenty-five years of trying to alter these realities. Thus, the U.S. strategy must begin with the assumption that it will always face a degree of risk with a nuclear North Korea. The policy question is how much risk is tolerable?

Trump tweeted recently with regard to another proliferator, “Iran will not be allowed to have a nuclear weapon.” Similarly, preventing North Korea from becoming a full-fledged nuclear state has been the goal of every U.S. president since Bill Clinton, who recalled: “I was determined to prevent North Korea from developing a nuclear arsenal, even at the risk of war.”  Indeed, The Clinton administration actively considered a strike on DPRK nuclear facilities in 1994.

Amid talk of “bloody nose” strikes in 2017, then Trump NSC Advisor H. R. McMaster said the United States “can’t tolerate the risk” of coexisting with a nuclear North Korea.  The reality, of course, is that the United States has, as far as we know been living with a nuclear-capable North Korea for most of this century, one indicator that the viability of deterrence has been underestimated. As Evans Revere astutely observed in a Brookings Institution paper, there is an inherent contradiction in McMaster and others questioning deterrence because Kim may not be a “rational actor,” on the one hand, yet arguing on the other hand that “limited strikes” are unlikely to escalate because Kim’s overarching goal is regime survival. Indeed, while absolutist statements about not accepting a nuclear North Korea are politically de rigeur, they are not new.  Previous administrations considered preemptive military strikes on both the Chinese and North Korean nuclear programs. In 1963–64 there was a very similar debate about stopping Mao’s China from getting the bomb. The Kennedy and Johnson administrations considered pre-emptive strikes, covert sabotage, and working with the USSR to halt the Chinese nuclear program. Ironically, in the late 1960s, as Sino-Soviet tensions mounted, Moscow probed the United States about interest in joint efforts to destroy Chinese nuclear facilities. But the risks of these options were rejected as too dangerous for good reasons.

Seoul’s proximity to the DMZ (less than forty miles) and Pyongyang’s forward-deployed long-range artillery and short-range missiles creates a state of mutual deterrence even absent escalation to nuclear war. With 50 percent of the ROK’s fifty-one million citizens living in the Greater Seoul area, and some two hundred thousand U.S. citizens there on any given day, they are within range of some fifty-five hundred long-range multiple artillery able to fire ten thousand rounds an hour. Moreover, in the near future, Pyongyang may attain a nuclear-equipped SLBM, (though vulnerable to detection) providing a survivable second-strike capability to hit regional targets like Guam or Hawaii and possibly, the U.S. mainland from twelve hundred to fifteen hundred miles at sea without an ICBM. As with the issue of “limited strikes’” what U.S. or ROK leader is prepared to bet that limited preemptive strikes on North Korea’s nuclear assets would not escalate and risk tens, if not hundreds of thousands of casualties in a DPRK response?