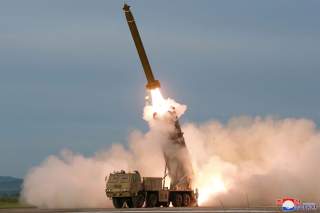 2017 marked a drastic turning point in North Korea’s long-range intercontinental ballistic missile (ICBM) program. On November 28, 2017, the Democratic People’s Republic of Korea (DPRK) conducted a successful test launch of the HS-15 “Hwasong-15.” Not only did this test validate North Korea’s ability to develop long-range ICBMs, but it also showed they could test two ICBM designs in a single year. The HS-15 test was followed by a wind-down in testing and a diplomatic push on easing tensions and saw an increase in inter Korean interaction.

While the DPRK got further along in their liquid-fueled long-range missile program in 2017, North Korea had also more quietly been working at the same time on improving their short-range artillery and Multiple Launch Rocket System (MLRS) capability.

Before coming to power, Kim Jung-un had repeatedly pushed for the creation and development of new long-range artillery and systems with increased accuracy. This drive gained fervor following the artillery bombardment of Yeonpyeong island back in November of 2010. This skirmish reportedly resulted in Pyongyang’s front line units being reorganized and prompted a review of North Korean systems currently deployed.

From 2010 up to 2017, there were multiple visits by Kim to artillery units to review facilities and to observe mass artillery firing demonstrations. But with diplomatic talks, these events were overshadowed as attention was refocused on Kim’s visits to civilian infrastructure improvement projects.

Following the Hanoi summit that failed to break the impasse between American and North Korea, cracks began to form in the diplomatic drive by the North. While Pyongyang had previously been careful in its media statements and comments made at the United Nations, we’ve started to see more aggressive rhetoric being put out by Kim’s officials. Furthermore, some of these new statements implied that unless progress was made by the United States in nuclear talks, the DPRK would be forced to reevaluate its diplomatic drive and to return to focus on military development by the end of 2019. More recently, North Korea has reinforced these statements over the summer by testing short-range systems and now its latest medium-range ballistic missile, the Pukguksong-3.

While 2017 was the year of ICBM, 2019 is proving to be a pivotal year of new artillery systems and solid-fueled short-range and medium-range missiles for DPRK. For instance, there is the KN-23 missile, which was initially paraded in February 2018 but never flight-tested that year. On May 4,  2019, the KN-23 was finally tested near Wonsan, close to the east coast area used by the DPRK’s ballistic missiles and anti-ship programs as a test site. The second follow on test of the KN-23 took place on May 9, 2019, at Kusong on the country’s west coast. The third and final test of the KN-23 took place on July 24, 2019, once again back on the East coast.

The KN-23 is a solid-fueled short-range ballistic missile and appears to draw from the design characteristics of the Russian 9K720 Iskander and South Korean Hyunmoo Missile systems. Although there are some features on the Iskander that are not present on the KN-23, there are enough similarities to indicate that the DPRK may have based part of their system on elements not entirely designed in-country. However, where they got the KN-23’s foreign elements is not entirely clear and is open to debate.

The North has fielded this system on two separate styles of chassis. The first chassis is an eight-wheeled transporter with heavy similarities to the Russian Iskander transporter. The second chassis is a sixteen wheeled, tracked transporter. DPRK has used an improvised tank chassis for their Pukguksong-2, KN-19, and a new weapon that appears to have similarities in design to the U.S. MGM-140 Army Tactical Missile System (ATACMS).

This tank chassis provides a vehicle with more mobility, and it can travel easier where wheeled vehicles would have an issue in more rugged terrain. Tank chassis also allows easier repairs by using a system that DPRK already has. Otherwise, Pyongyang would have to rely on imported parts, which may be hard to come due to sanctions.

On July 31, 2019, the DPRK carried out its first test of a new large-caliber MLRS artillery rocket called the KN-25. This new artillery system is fielded on a tracked chassis in a similar method to the tracked Pukguksong-2, KN-23, and North Korea’s ATACMS system. The first test of the KN-25 happened on July 31, 2019, from the country’s east coast near Hamhung. Although the imagery of the test released by North Korea was heavily censored with portions of the launcher censored out, some experts were able to correct the censored image. Pyongyang conducted a follow on test of the KN-25 on August 24, but this time the DPRK did not censor imagery from the launch.

While the DPRK has conducted tests of KN-23 and large-caliber rocket systems such as the KN-25, the second guided missile system that DPRK has tested this year is the brand new ATACMS. This ATACMS appears to be designed to fill a similar role like the U.S. MGM-140 ATACMS, and the DPRK’s ATACMS missile is roughly estimated to be about 5.5m long (making it shorter than the KN-23).

What to make of this new push in testing artillery and short-range systems? We must look at the current diplomatic impasse that continues, even with two summits and one cross border meeting between U.S. President Donald Trump and North Korean leader Kim Jong-un. These talks have not made major progress in breaking the current deadlock. As such, these tests reflect as the DPRK looking to show displeasure but not—yet—pull entirely back from the current diplomatic process and apply pressure on the U.S. administration.

A second element to look at is that the tests are a way for North Korea to see what they can get away with. While the test of the KN-25 rocket system may not break what Pyongyang sees as an agreement between Trump and Kim, the testing of the KN-23 and ATACMS systems does start to push small boundaries and helps the DPRK make progress on its solid-fueled ballistic missile program.

In fact, even for developmental prototype systems, we have seen tests of many launches of multiple missiles over the summer. These tests were also conducted over a short period of time, which for a new system indicates the DPRK has really put the materials and resources into the production of these weapons tests.

Since the DPRK first tested the KN-11 and Pukguksong-2, there has been some question over the North’s ability to mass-produce reliable working solid motors for use in submarine-launched ballistic missiles (SLBMs) and Pukguksong-2’s beyond prototype testing unit. After all, if North Korea intends to put these systems into true mass production, Pyongyang will need to assure both high standards in manufacturing facilities and the purity of the material used in the production of the motors.

Testing of these short-range ballistic missile systems can help DPRK as they expand their solid fuel production capability. When and if North Korea does return to long-range testing as Kim seeks to move beyond liquid-fueled ICBMs to solid-fueled systems, the tests of shorter-range missiles ensures they will have production down for solid motors.

Finally, a third element to look at is that while the United States has spent a lot on moving the United States Forces Korea (USFK) command further away from the border to new housing, Pyongyang is developing the capability to strike it still. The DPRK’s new long-range artillery and short-range missiles allow for much deeper targeting and further mission capability that Kim can bring to bear against South Korean and U.S. positions.

It is unclear if the DPRK will directly go back to the testing of ICBMs. However, given North Korea’s new willingness to conduct tests of shorter-range weapons, it is likely we will see further tests of such systems before the end of the year.

Nathan Hunt is an independent analyst specializing in 3D reconstructions of DPRK facilities and weapon systems whose work has been published by 38North and Jane's Intel Review.