The Limits of Economic Leverage in North Korea 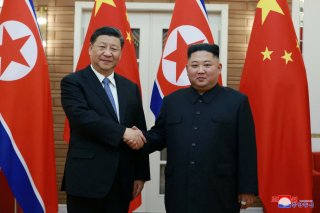 For decades, brave and determined American policymakers, when confronted by challenges from North Korea, have courageously fixed their steely gaze towards East Asia and, with resolution, fortitude, and conviction, have chosen to look for scapegoats rather than actually make difficult choices. And while scapegoats have been found in multiple locales, the most common target is China, the one nation that most people believe could easily bring North Korea to heel. “I am very disappointed in China,” former President Donald Trump tweeted in 2017. “Our foolish past leaders have allowed them to make hundreds of billions of dollars a year in trade, yet they do NOTHING for us with North Korea, just talk. We will no longer allow this to continue. China could easily solve this problem!”

In truth, China cannot easily solve this problem. Beijing does, of course, have enormous economic leverage over North Korea. But even if Chinese leaders could somehow be convinced to bring that power to bear (an unlikely proposition), there is still no leverage strong enough to force the Kims to yield. The North has enough economic connections (both formally and through its extensive black-market network) to keep the elites at the top of society satisfied. And since those same elites have long demonstrated that they don’t care if the rest of the country starves, and have even used such domestic crises in the past as a means of increasing their domestic repression, there seems no reason to think that the North wouldn’t continue to muddle through even the most stringent Chinese sanctions.

Indeed, the fundamental problem with the alleged “China solution” is that Americans have long misunderstood the relationship between the two countries. Popular belief is that they are closely connected by fraternal and ideological bonds, a perception driven by decades of Cold War enmity that were particularly reinforced by the Chinese intervention in the Korean War (as well as by simplistic visions of race, nationalism, international communism, Confucianism, and so many other factors that Americans tend to reduce to a “one-size-fits-all” model). In reality, however, the relationship has long been more tumultuous  than Americans like to think. Ties between Pyongyang and Beijing are less of a close bond resembling that of “lips and teeth,” and more of a marriage of convenience, born of self-interest and designed to meet short-term strategic needs. When those bonds have hit difficult periods, as they often have, North Korean leaders have made it clear that they would never yield to Chinese influence, and Chinese leaders have made it equally clear that their influence was rather limited anyway. One high-ranking Chinese figure complained to American officials in 2009 that his country agreed with the U.S. position on the DPRK nuclear program but could do little to help. “The only country that can make progress with the North Koreans is the United States,” he noted. “The United States was the key while China was only in a position to apply a little oil to the lock.”

This isn’t to say, of course, that China has no role to play in the process. It certainly does. But, it can only help within parameters that have already been deemed acceptable by the North. In other words, if Pyongyang decides it is indeed in their best interests to engage in genuine discussions at the nuclear negotiating table (which it won’t), China might be able to provide dessert, and maybe even drive them home. The journey to the table, however, will come only through Pyongyang.

Mitchell Lerner is a professor of history and director of the East Asian Studies Center at The Ohio State University. He is also associate editor of the Journal of American-East Asian Relations.