Maximum Pressure on North Korea Is a Total Failure 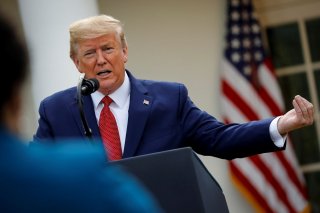 American and allied security continue to suffer from an unresolved war with nuclear-armed North Korea, as talks collapsed under the weight of a confused and fruitless sanctions regime. The coronavirus crisis offers political space to correct this policy failure, as it challenges Washington’s usual conceptions of security with the prospect of hundreds of thousands of casualties in the United States alone. On March 23, UN Secretary General Antonio Guterres called for a “global ceasefire” to “end the sickness of war and fight the disease that is ravaging our world.” The next day, UN High Commissioner for Human Rights Michelle Bachelet called for the easing or suspension of sectoral sanctions against North Korea and other countries.

President Trump has ample authority to lead a peace process and a sanctions relief process, as his predecessors Nixon and Clinton respectively did with Vietnam. That Trump has not yet chosen to do so, even at this advanced stage of his presidential term, is a political decision. He can change course at any time, especially as the coronavirus crisis lays bare the contradictions of spending hundreds of billions yearly to fight wars at the four corners of the globe while a weakened healthcare system struggles at home. North Korean leader Kim Jong-un may have left the negotiation table last December to return to “develop[ing] indispensable and prerequisite strategic weapons for national security,” but he tellingly added that is only “until the U.S. rolls back its hostile policy and a lasting and durable peace mechanism is in place.”

Questioning the “sickness of war” and why America is still in a conflict with North Korea should not be an issue for a president that stood for the idea that “great nations do not fight endless wars.” It’s a conflict that has lost track of its objectives and relation to U.S. interests. Indeed, there is no Congressional declaration of war to guide it. There are just Security Council resolutions which authorized UN members to help “repel” the Northern offensive of June 1950 and to “restore international peace and security.” The repelling, 6000 miles away from America, was achieved by September 1950. Meanwhile, the continuation of the Korean War remains to this day the very antithesis of peace and security in the region.

The lack of mandate makes it look like Washington continues the war today based on the view that North Korea’s very existence is a threat to international peace and security. That would be an aggressive interpretation of U.S. interests to say the least, one that seems hardly reconcilable with international law. The United Nations has, with American consent, long recognized North Korea as a sovereign member state. Moreover, both Koreas have called for a peace agreement involving the United States, and two out of three Americans support concluding such an agreement with North Korea, according to a YouGov poll from last year.

Additionally, questioning sanctions should not be an issue for a president that dismissed a call for strengthening them with the humanist observation that “they have a lot of great people in North Korea that have to live also.” Sanctions against the country have become a blunt, sweeping tool of economic violence with only a dubious link to U.S. interests. They used to be part of a so-called “smart sanctions” regime supposed to delay and discourage the nuclear program by targeting the North Korean military and elite. Today, however, they have expanded into a “maximum pressure” campaign imposing a global and almost total embargo on the country, indiscriminately bludgeoning the entire population. It has become difficult to distinguish from economic siege warfare and hence runs the risk of rallying the whole country in anti-U.S. sentiment.

Yet the go-to counterargument to peace and sanctions relief still seems to be the North Korean nuclear program. Washington has used peace as a bargaining chip for denuclearization, refusing to grant it as long as North Korea maintains a nuclear arsenal. The Trump administration in particular has also denied sanctions relief before substantial denuclearization. It dismissed, for instance, a Sino-Russian plan of partial relief intended to maintain dialogue momentum and address humanitarian concerns. The administration has held fast to these principles even when the coronavirus crisis hit, with Trump at most offering aid. It’s no wonder then that the North Koreans conclude that “no matter how excellent and firm the relationship between the top leaders of the countries is, it can not reverse the U.S. hostile policy towards [North Korea].”

To be sure, America would be safer today if North Korea were not a hostile nuclear power. Yet it is dubious at best that adversarial measures like maintaining the state of war and inflicting economic violence could today force the country to surrender its nuclear arsenal. North Korea sees itself as fighting an existential war in which nuclear weapons are the ultimate deterrent against U.S. “fire and fury” or “bloody nose” strikes. The more America raises North Korean threat perception by reserving the wartime right to use force, or maintaining sanctions that kill civilians, the more North Korea will want to hold onto these weapons.

Pyongyang has clearly concluded that even the danger emanating from “maximum pressure” falls far short of the danger it sees as ensuing from the surrender of its arsenal. Sure, sanctions are now so strong that thousands, and probably more, are dying from the deprivations. Sure, the death toll is likely to rise further as the virus hits the country, not least because sanctions continue to interfere with healthcare and international humanitarian operations. But how could that even compare to the hundreds of thousands, the millions of casualties North Korea stomached in the “hot” period of the Korean War or the famine of the 1990s? It’s also not lost on them that being nuclear-free is not a guarantee that the United States won’t intervene militarily (Libya) or impose devastating sanctions (Venezuela).

Even the concern that scaling back sanctions could somehow “reward bad behavior” and undermine the Security Council’s authority feels hollow at this point. North Korea’s already been made an example of: there are very few countries that would dare or have the capacity to go through the same ordeal. What actually undermines the Council’s authority today is that its resolutions are so thoroughly defied and ignored by North Korean missile launches. “If the Council thought it had the authority to limit our right to self-defense,” the North Koreans must be thinking, “why didn’t they ban our entire army while they were at it?” It’s telling in this sense that Council unity is breaking down, as China and Russia lose patience with America’s perceived lack of compromise. They increasingly support North Korea and openly challenge the legality of U.S. unilateral sanctions.

It should be amply clear that North Korea has no intention to surrender and has the means and determination to pose a growing threat to American and allied security as long as it doesn’t see recognition of a right to exist. The status quo of a failed hardline policy remains much more dangerous than one of peace and reconciliation that at least ends the hostilities with this nuclear power, and then seeks to negotiate an arms control agreement. The coronavirus crisis creates political space to do so, as it reminds us of how misguided longstanding security priorities can turn out to be. We need to shake off the sunk costs fallacy and wake up to the opportunity costs of the fruitless policy on Korea.