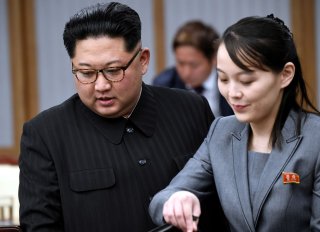 Regime preservation within the Kim family is what I think is of utmost importance to Kim Jong-un. To maintain this “theocratic” system, Kim Jong-un’s successor must be from the Baektu Bloodline. The only person who is a descendant of Kim Il-sung, in Kim Jong-un’s inner circle, and is of ruling age is his sister, Kim Yo-jong.

Kim Yo-jong has been being groomed to be a senior political figure, but may lack the necessary preparations to be presented as the first female head of state. If she were to succeed Kim Jong-un as the fourth leader of North Korea, she may face strong hesitation and skepticism from the political male elders who embody a patriarchal system. For North Korea watchers, it may be worth considering the possibility that Kim Pyong-il (Kim Jong-il’s paternal half-brother) may be asked to be a political guardian of Kim Yo-jong, or be the successor himself. Kim Pyong-il, who has been serving as a diplomat abroad for forty years and recently returned to Pyongyang, is within the Baektu Bloodline and may be invited into the inner circle to support Kim Yo-jong to maintain the regime within the Kim Dynasty. He could be part of a larger “collective leadership” that supports and guides Kim Yo-jong as the head of state. If she is not prepared to be immediately presented to the public amidst a sudden death of Kim Jong-un, there may be a transitional period during which a collective leadership reigns.

While possible, it is difficult to imagine that a collective leadership will take over the state in the long run in the absence of a successor who is from the Kim Family. This is because the political legitimacy of the state is derived from the mythical narrative that North Korea’s founding father Kim Il-sung is essentially a god, and his successors will continue to lead the Socialist revolution and protect the nation. North Korea without a successor from the Kim family is like worshippers going to church without a deity to worship.

To preempt any type of opportunistic dissent and social chaos, a nationwide lockdown may be instituted. To prevent any waves of defections from North Korea and any other phenomenon that could cause regional instability, China may immediately further fortify its border with North Korea along with other forces that may be activated to secure the region.

But ultimately, it is impossible to predict what will happen in this shrouded country if Kim Jong-un were to die suddenly.

Jieun Baek is a Ph.D. candidate in Public Policy at the University of Oxford. Previously, she was a research fellow at the Belfer Center for Science and International Affairs at Harvard University where she wrote North Korea’s Hidden Revolution: How the Information Underground is Transforming a Closed Society (Yale University Press, 2016). You can follow her on Twitter at @JieunBaek1.