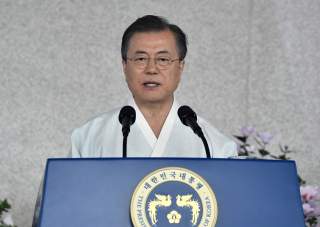 Nobody can accuse Moon Jae-in of thinking small.

Within a year of taking office, the South Korean president decided to use his considerable political capital and domestic political support to begin a comprehensive rapprochement with his fellow Koreans in the North.  Kim Jong-un, the dictator who was testing intercontinental ballistic missiles as recently as the fall of 2017, sensed an opportunity to perhaps split the U.S.-South Korea Alliance and was intrigued by the policy.  And in less than a year, Kim and Moon would meet for three summits—the last one, in September 2018, resulting in a detailed demilitarization accord which sought to lower tensions along the Demilitarized Zone, regularizing bilateral contact, and pave the way for more serious discussions.

2019 hasn’t been as hopeful. Inter-Korean talks have ground to a halt since President Donald Trump and Kim walked away from Hanoi in February without even a cursory joint statement. Nowadays, it’s more likely for officials in Pyongyang to scold the South for acting as an American stooge. Agreements that were inked last year are in purgatory, with a joint military commission in limbo and joint excavation projects on hold. Moon Jae-in’s judgment is increasingly being questioned from all directions. Chosun Ilbo ran an editorial in early August suggesting Moon may have lost his mind. The Korea JoongAng Daily wasn’t much kinder to Moon’s North Korea policy: “Seoul has itself to be blamed for the current pitiful situation...Because Seoul posed as an eager go-between [between the U.S. and the North], its role naturally became meaningless once the two hit it off.”

Moon, however, remains a full believer in what has been described in shorthand as the “sunshine policy”—that you will get a lot more from the Kim regime by finding avenues of cooperation than by isolation.  This is a man who, after all, served as President Roh Moo-hyun’s top staffer, the major proponent of the sunshine policy and the architect of the second only inter-Korean summit since the end of the Korean War.  No amount of badgering from the editorialists or bad-mouthing from the political opposition is powerful enough to extinguish Moon’s hopes for the future.

His August 15 speech commemorating the liberation of the Korean Peninsula from Japan was quintessential Moon Jae-in: full of hopeful rhetoric, wrapped with a touch of defiance about why his approach to the North will pay off over the long-term.  Moon is as committed to establishing a durable peace on the Korean Peninsula through bold economic integration as he has ever been.  “[W]e aim to establish a peace economy in which prosperity is achieved through peace and also complete our liberation through the unification of the Peninsula,” Moon remarked.  The final goal: one Korea by 2045.

In Moon’s view, unification is not only possible but desirable.  “Once the Korean Peninsula is unified, it is expected to become one of the six largest economies in the world,” the South Korean president predicted. As soon as a single Korean nation is formed, businesses that once shunned North Korea or avoided it due to the intricate web of U.S. and U.N. Security Council sanctions will reassess and pour in investment.  Peace will hover over the Korean Peninsula like a sunny day hovers over the state of California. North Koreans will cease to be North Koreans and will instead become Koreans—citizens of a historically proud, politically unified, financial behemoth that could overtake Japan as East Asia’s economic powerhouse.

None of this is possible, however, if the spirit of constructive dialogue that prevailed last year is overtaken by paranoia, hostility, and pessimism.  What Moon was communicating in his address was the same message he has staked his political career on—shutting the book on nearly 70 years of Korean division.

Today, of course, any talk of Korean unification is the stuff of fairytales. It’s as close to a mirage in the desert as you will find in global politics, about as likely as Iran and Saudi Arabia making nice or China allowing Taiwan to declare independence. Whether Moon wants to admit it or not, Korean unification is not as easy as turning on a lightbulb or willing it into existence through positive thoughts. In fact, the goal of one Korea won’t even be determined by the Koreans themselves; as long as Washington has a veto over Seoul’s North Korea policy and is willing to stifle the same cross-border projects the Moon administration wishes to implement, unification is not a realistic prospect.

But to rule it out completely would also be shortsighted. Crazy things have happened before. If you told a U.S. official in 1980 that the Berlin Wall would fall in less than a decade, you might have been called clinically insane. Very few people would have thought Hosni Mubarak, Egypt’s 30-year dictator, would be swept from power on the back of mass protests. The same could be said of Libya’s Muammar al-Qaddafi.  And yet they did.

Moon Jae-in understands Korean unity is a big lift.  He probably understands that accomplishing such a feat by 2045 is incredibly unrealistic.

But for Moon, none of this matters. What’s important is to keep the idea alive so the next generation of Korean leaders can turn the dream into a fact of life.  If Moon succeeds in doing that, all of the recent denunciations and insults that have been thrown his way may be worth it.