Moon Jae-in's War Against Coronavirus: What Do the Voters Think? 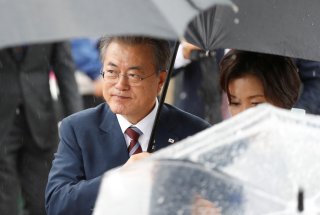 When the coronavirus outbreak hit South Korea, it looked like that would be yet another setback for Korean President Moon Jae-in, whose Democratic Party is trying to hold onto plurality control of the National Assembly in elections that take place April 15.

But a systematic response that included mass testing, localized mobile alerts, and an aggressive regime of quarantining arriving passengers have succeeded in flattening the curve and, if polls are to be trusted, limiting Moon’s electoral liability.

In fact, national polls in the final week of March show the Democratic Party (Minjoo) expanding its lead from 8 to 13 points. And local polls of districts in Seoul, Gyeongi, and Gangwon show the Democrats leading in a majority of contested battlegrounds, while they are reclaiming Jeolla and even hanging tight in conservative strongholds like Daegu.

The Democrats already control 35 of the 49 seats in Seoul, so they have to hang onto seats there. The party is leading in a variety of polls in Seoul battleground districts. Moon’s allies are doing well. His former spokeswoman and rookie politician Ko Min-jeong has a 9 point lead over former Seoul mayor Oh Se-hoon in the Gwangjin B district held by Democrat Choo Mi-ae for five terms. Moon’s first prime minister, Lee Nak-yeon, leads former President Park’s PM by 21. The Democrats even look like they will flip seat held by 2019 LKP floor leader Na Kyung-won. Multiple polls show Democratic nominee Lee Soo-jin leading Dongjak B.

In Seoul, the United Future Party (UFP, the successors of the conservative LKP) has reason to be excited about Gangnam A, where a defector, former North Korean diplomat Thae Yong-ho (who is changing his name to Thae Gu-min), is leading by 9.

More good news for the Democratic Party can be found in the suburbs of Seoul in Gyeonggi, where Democrats have solid leads in the northern city of Uijeongbu (A) and Suwon (B).

In fact, the Democrats might even knock off Justice Party leader Sim Sang-jung. Sim, the long-time labour activist who was on the run from the police for nine years in the 1980’s for her role in instigating strikes during the authoritarian Chun Doo-hwan regime, is leading her Democratic opponent, former bank executive Moon Myeong-suk, by just 1 point. Sim has held the seat since 2012.

Hence another strategy the Democratic Party is using to expand its plurality is by challenging progressive and left-leaning minor party candidates. While many of the minor parties support Democratic control of the legislature, the Minjoo Dang’s lack of a true majority makes it harder to pass controversial bills.

No matter, almost all of them appear likely to lose. In five of the North Jeolla seats held by former People’s Party candidates, the Democrats lead in four of them. Lee Yong-ho, one of the few independents to lead his Democratic opponent, only has a 2.3 point lead. The UFP isn’t even trying to compete; Jeong Yoon-cheon, the single conservative to hold a seat in North Jeolla, is not competing for reelection and competing for a seat on the party-list instead.

The Democratic Party’s biggest struggles are holding onto seats in the conservative strongholds of South Gyeongsang, Busan, and Daegu. In those areas, they made gains in 2016, in an environment of discontent against the Park administration, and this time around, the UFP has strategically nominated some big guns to try to take back the seats that were traditionally theirs.

For example, in Daegu’s Suseong A, the first Daegu seat for the Democrats to ever win, the UFP pulled four-term incumbent Joo Ho-young from neighboring Suseong B to try to take down representative Kim Bu-gyeom. In Busan’s central shopping district Jingu-A (which includes Seomyeon), the UFP nominated former Busan mayor Seo Byeong-su against first-term incumbent Democrat Kim Yong-chun. Kim leads by just 3 points, according to a poll published in Dongsa. The Democrats also have a first-term incumbent in Saha-gu A, Choi In-ho, defending a seat he won by 4 points in 2016.

Proportional voting is a wild card. With new changes to the electoral system meant to increase the allocation of seats to minor parties, the way citizens vote could change. The major parties created satellite parties to try to exploit the new electoral system and increase their representation in the proportional seats. Surveys show that the UFP-supported party does better in proportional voting in some districts that their party does in constituency polls, including in Suwon B.

As Korea is trying to get back to normal, candidates are holding events from mobile campaign trucks and doing fist bumps with supporters. The final polls will be released one week before the election, after which time no more polls can be released.