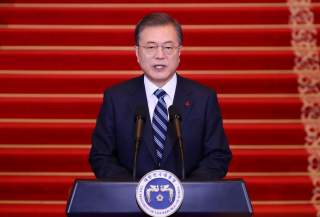 The Year 2019 was a long and lonely road for South President Moon Jae-in. His poll numbers were dropping. Relations with the United States were rocky, due in part to a time-consuming negotiation about defense cost-sharing on the peninsula (those talks remain ongoing). And his peace initiative with North Korean leader Kim Jong-un, once thought to be so promising the year before, ran smack into a wall of North Korean resistance, U.S. sanctions, and wobbly denuclearization diplomacy. Moon entered 2020 looking at the mid-way point of his tenure, with few notable accomplishments under his belt.

The South Korean president and former Blue House chief of staff surely understands the dicey situation in front of him. In public remarks, Moon has been quite candid in his disappointment about the lack of movement on the inter-Korean peace track. During one of his short trips to Washington in 2019, Moon pushed President Donald Trump to relax some of the U.S. and U.N. Security Council sanctions that have impeded cross-border projects and economic exchanges between the two Koreas. Trump, however, wasn’t buying the argument. Nearly a year after that meeting, all of the sanctions remain intact, which means that any projects with the North that are actually meaningful are frozen in time and unable to come to fruition. It’s a problem Moon Chung-in, a foreign policy adviser to Moon, expressed just the other day during a panel at the Center for the National Interest. "In order to make the peace economy work, there have to be economic transactions from North Korea,” Moon told the audience. “But international sanctions prevent South Korea from engaging with North Korea.”

For somebody like President Moon—a do-gooder, perpetual optimist, and peace-oriented politician who believes transforming the Korean Peninsula into a zone of tranquility is his personal calling—the reality he confronts can only be described as insufferable and bleak. For all of Moon’s personal qualities as a leader and aspiring peacemaker, he is one person with very little power in the broader chain of events. If it were up to the South Korean president entirely, Seoul and Pyongyang would already be well on their way to rebuilding the Kaesong Industrial Complex, expanding tourism, linking up the Korean Peninsula’s transportation infrastructure, turning the Demilitarized Zone into a zone of monuments, green gardens, and rose bushes, and perhaps welcoming North Korean diplomats to their new embassy in the South Korean capital. But alas, with the exception of establishing formal diplomatic relations, Moon can’t do any of that—and not just because the conservative opposition in Seoul would go bonkers. The sanctions architecture currently in place makes much of it impossible. Unless the Moon administration is willing to severely jeopardize its relationship with the United States, its most important foreign ally and security partner, none of the measures listed above are practical. Joint ventures with the North are literally banned by the U.N. Security Council unless exempted, something the Trump administration has made abundantly clear it’s not interested in doing.

Moon’s New Years speech on January 7 was, therefore, less newsworthy than meets the eye. His warnings about dialogue falling apart are well taken; if U.S.-North Korea nuclear diplomacy is currently in a coma, North-South diplomacy may already be dead. The South Korean president, however, is not willing to give up and is highly unlikely to stop trying given the personal and political capital he has invested into his peace gamble. That was certainly the message of the speech this week, where Moon emphasized that "I’m willing to meet repeatedly and talk ceaselessly” with the North Koreans for as long as it takes.  Moon’s address to the South Korean public was part desperation, part warning about the dangerous future in store if the dialogue isn’t kept alive, and part foresight.

While he put forth several ideas that could break the diplomatic logjam—forming a single Korean team for the Olympics in Tokyo this summer; putting in a joint bid with the North to host the 2032 Olympics; reconnecting railways; and getting tourism at Mt. Kumgang up and running again—none of them are sufficiently bold enough to attract Kim Jong-un’s attention. Kim wants one of two things: either full-blown sanctions relief from the Security Council or for South Korea to grow a spine and plow ahead independently regardless of the hell it would produce in Washington.

The sad reality is that unless the Trump administration changes its position considerably this year, Moon Jae-in’s peace overture to the North is as dead as disco. Washington has been clear from the very beginning (unwisely in the view of many) that North Korea’s final, fully-verified denuclearization takes priority over everything else—including attempts by South Korea, a sovereign nation with its own history, interests, and deep sense of pride, to make peace with its neighbor to the north. If that calculation changes, Moon has a slim chance to move forward—assuming the North Koreans are still interested in doing so. But the more likely course of action is also the most unfortunate: Moon, with two years left in his term, will be finding any tight loophole he can to push his peace agenda without antagonizing a U.S. administration that is thick-headed and stubborn in its ways.