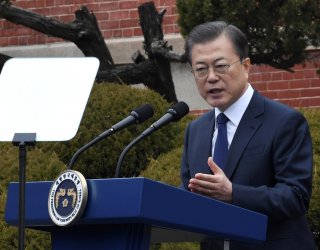 Can the COVID-19 pandemic change the course of history during the April 15 South Korean elections? To explain what that means, one should go back to 1987, during Korea’s transition away from the military dictatorships of Park Chung-hee and Chun Doo-hwan toward democracy. Since that seminal year, the country’s presidential politics have followed a rule of two: unable to re-elect presidents after their single five-year term, voters typically choose back-to-back candidates from similar locations on the country’s ideological spectrum.

Its first two presidents of the democratic era, former general Roh Tae-woo and legislator Kim Young-sam, had been on different sides of Korea’s fight for democracy in the 1980s, yet a merger of center-right parties in 1990 placed them in the same camp, allowing Kim to succeed Roh in the 1992 election. Both governed as reformists, disassembling the most draconian elements of the military dictatorship while hoping to keep its economic engine purring.

When the Asian Financial Crisis of 1997–98 abruptly switched that engine off, voters tried something else. Enter Kim Dae-jung and then Roh Moo-hyun from stage center-left, both of whom had been on the frontlines of the pro-democracy movement. They promised not so much a hard left turn as a fairer society, along with a restored economy, better relations with North Korea, and a path toward a prosperous, unified peninsula.

This failed to come to pass. North Korea’s behavior, despite the summitry and gifts it received from the South, changed little in this time and its nuclear program generated international headlines, overshadowing the benefits of inter-Korean meetings and tourism projects. That the economy began slowing—to the detriment of young job seekers—doomed the center-left to a decade in the political wilderness.

Enter Lee Myung-bak and Park Geun-hye, stage right, who campaigned as restorationists. Neither, of course, said they would bring back dictatorship but Lee, a Hyundai executive, campaigned on his ability to bring back old growth trends and Park, daughter of the autocrat Park Chung-hee, capitalized on nostalgia for his economic successes. Both also turned from the proactive outreach of Kim Dae-jung and Roh Moo-hyun toward North Korea, insisting on reciprocity in inter-Korean dealings. They maintained this standard even after Pyongyang rebuffed it, sometimes violently.

But eventually Lee and Park would share one other trait: prison time. Park’s connections to a bizarre cult leader’s family started the conservatives’ fall from power, complete with the country’s first successfully upheld impeachment in 2016 and a resounding win for the progressive Moon Jae-in in 2017. Park and Lee have both been jailed—in his case for financial crimes, both financial and political in hers—and barring a pardon may live out their remaining lives in detention.

Three years after he took office, the April 15 election will be the most significant gauge yet of Moon’s position. If historical trends hold, Moon Jae-in and his Democratic Party will not only keep control of the National Assembly, but their nominee in 2022 will be the next president. Still, Moon has his reasons for not assuming a win is inevitable.

Moon’s approval ratings were sky high in 2017 and much of 2018, as he sought to restore ties with North Korea and prevent a war of words between Donald Trump and Kim Jong-un from turning into a war of the more literal kind. Since then, though, his numbers have fallen, as young people’s frustrations with the economy persist and as outreach to the North has floundered. The Kim-Trump rapprochement Moon helped broker has faltered, with Washington and Pyongyang blaming each other for demanding too much and giving too little.

The one thing Pyongyang and Washington seem to agree on is South Korea’s usefulness as a punching bag. Trump demands South Korea pay more for its own defense, regularly rips the U.S.-South Korea alliance as unfair to U.S. taxpayers, and even takes shots at Parasite’s Oscar win. North Korea continues to test arms that threaten South Korea but do not violate Trump’s red line of no nuclear or long-range missile tests, and lambastes the South when it protests. The COVID-19 outbreak has seen a friendly gesture by Kim, and Trump has attempted to obtain Seoul’s assistance in managing America’s own outbreak, but fundamental differences with North Korea and the United States remain unresolved, certain to re-emerge even if the pandemic persists.

Which brings us to the elections and COVID-19’s implications for it. South Korea was hit hard and hit early by the outbreak, even after Moon’s government assured the public the outbreak was under control and declined to halt visitors from China, COVID-19’s epicenter, from entering the country. Conservatives have seized on this, mounting a case that Moon’s response to the pandemic makes him worthy of not only electoral defeat, but impeachment.

So far it has not worked. Moon’s ratings have held steady, suggesting his party will hold its majority. At least for now, history holds the edge.

Why is that? Moon has a built-in advantage in that his country’s well-trained civil service was more prepared for an outbreak than many others, especially in the West. Memories of SARS in the early 2000s and MERS in 2015 linger, not only in Korea but in its fellow Asian Tigers: Taiwan, Singapore, and Hong Kong. All four, along with Japan, have been lauded for their quick and comprehensive response to the viral outbreak. Moon may not deserve credit, per se, for the civil service’s successes, but this need not stop him from claiming it.

And most importantly, South Korea’s conservatives remain deeply unpopular. In fact, at the end of each 10-year, two-president period the ruling party has exited in a deeply unpopular position: Kim Young-sam’s ineffectual response to the Asian Financial Crisis (and family disgrace) sank his party in 1997; by 2007 Roh Moo-hyun was seen as a political lightweight with staggeringly low approval ratings; a scandal-plagued Park Geun-hye managed to be even less popular.

Korean parties tend to struggle with this undertow for many years after their defeat, and there’s little evidence now that the conservatives are poised to surmount it. They have struggled to unite their ranks since Park’s ouster, find a compelling message, or even a party name (the awkward “United Future Party” has been their standard since last month). For now, the weight of history looks like it will hold, to Moon’s advantage.

COVID-19 may have the last laugh if the virus persists throughout the year, tanking South Korea’s industrial production and the markets of its main trading partners, but we probably won’t see that before April 15.